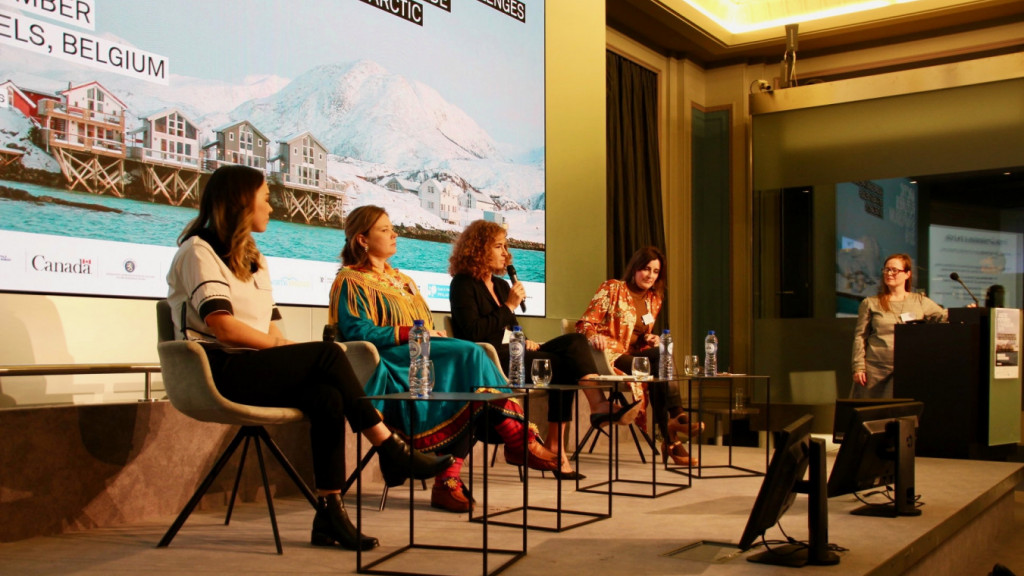 Nearly 200 politicians, civil servants, academics, representatives of Arctic Indigenous groups, entrepreneurs, and business leaders came together in Brussels on Monday 25 November at the Residence Palace in Brussels’ EU Quarter to discuss topics important to Arctic stakeholders, including the Arcitc Council in a changing Arctic, the ovelap between safety and security in the region, gender considerations, Arctic labour force and demographics, and sustainable and innovative uses of Arctic biological resources.

Opening keynote speeches were delivered by a series of very distinguished speakers, including Member of the Belgian Polar Secretariat Piet Steel, Director for International Ocean Governance and Sustainable Fisheries at DG MARE Veronica Veits, The EU's new Ambassador at Large for the Arctic Lars-Gunnar Wigemark, and EU Coordinator of the Sámi Council Elle Merete Omma.

Following the keynote session, Arctic Centre at the University of Lapland researcher Malgorzata (Gosia) Smieszek led a panel discussion focused on the Arctic Council in a Changing Arctic. The panel included Senior Arctic Officials representatives from Arctic indigenous groups the EU, and a French senator. The panel discussed new challenges of the Arctic Council and paid special attention to communication, engagement with local communities and engagement within the international arena. Tove Søvndahl Gant, Policy Officer and Expert member of the UN Permanent Forum on Indigenous Issues (as from January 2020) and Elle Merete Omma highlighted the necessity to keep indigenous voices strong in the Arctic and to invest in education about Arctic-related matters, especially in this time of renewed interest in the region. Other high-profile participants in the panel shared interesting new perspectives on the Arctic Council’s engagement and involvement in economic matters, in particular through the Arctic Economic Council.

A symposium of substance

After a marvelous lunch with seafood provided by Royal Greenland, the afternoon focused on more focused topics.

The first panel of the afternoon, moderated by Senior Research Fellow at the Fridtjof Nansen Institute, Dr. Andreas Østhagen, focused on the overlap between safety and security in the Arctic. Three of the seven panelists were in positions created during 2019 – Kathleen Larkin (Arctic Security Officer, Office of Nordic, Baltic and Arctic Affairs, U.S. Department of State), Neil O’Rourke (Assistant Commissioner for the Arctic Region, Canadian Coast Guard) and Jari Vilén (Senior Advisor for Arctic Policy, at the European Political Strategy Centre), indicating an increased interest in the region on many fronts. The remaining four panelists represented, respectively, the Royal Norwegian Air Force and NATO, the Finnish Ministry for Foreign Affairs, and academia, including a representative from St. Petersburg State University to offer a Russian perspective on Arctic security. A question from Dr. Østhagen concerning the presence of China in the Arctic led to an engaging discussion which highlighted differing opinions from the panelists, and highlighted all the possible interests at stake.

The third and fourth all-women panels were a great success. The third session, Gender Considerations in the Arctic, led by Rósa Rut Þórisdóttir from the Steffansson Arctic Institute, was the first of its type at the Arctic Futures Symposium, and took place on the UN International Day of the Elimination of Violence Against Women, sending a strong message to the public. Ellen Marie Jensen, Guest Researcher at the Center for Women’s and Gender Research at the University of Tromsø, and Laura Churchill, Youth Board Member of Pauktuutit, gave powerful insights of the conditions of indigenous women in Sámi and Canadian Arctic indigenous communities respectively.

The fourth panel moderated by Federica Scarpa, Communications Manager at the Icelandic Arctic Cooperation Network (IACN), investigated the situation of the labour force in the High North, and included Tonje Nermark, Vice-President Strategic Communications and Public Affairs at Mo Industrial Park in Norway, who called attention to having Arctic youth’s environmental values to be reflected in the region’s future. Odile Joanette, Executive Director of Wapikoni Mobile, brought the inspiring example of her non-profit organisation based in Québec, which works with indigenous youth to develop their own new narrative and identity, matching their indigenous values with the modern world.

The last panel focusing on sustainable uses of Arctic biological resources and moderated by  Dr. Christian Prip of the Fridtjof Nansen Institute brought attention to many innovative ideas, including the potential of using seaweed and fishery products in Nunavut through fruitful collaboration between scientists and the Indigenous Peoples of the Canadian Arctic, as described by Jean-Sébastien Moore, Professor at Université Laval. Perspectives from the fishing industry (Royal Greenland), biogas sector, and forestry industry in Finland were also included.

Nils-Olov Lindfors, Councillor of the Region of Norrbotten and Chair of the Northern Sparsely Populated Areas (NSPA) network, closed this year’s symposium with the remark that nobody can undermine the close relationships that tie the Peoples of the Arctic together, making them all brothers and sisters.

A big thank you ot those who made it possible

The International Polar Foundation would like to thank all the speakers and moderators who accepted our invitation to participate in the symposium, sharing their knowledge to a Brussels audience. The Foundation would also like to thank the Brussels Capital Region for its financial support, and most importantly all its partners from Arctic Representations and Missions to the European Union in Brussels, Nordic Regional Offices, and private organizations which helped make the 10th edition of the Arctic Futures Symposium such a great success! And we shouldn't forget to thank all the participants who took part in the symposium and came with their challenging questions to help spark engaging conversations.

We look forward to seeing everyone again next year!