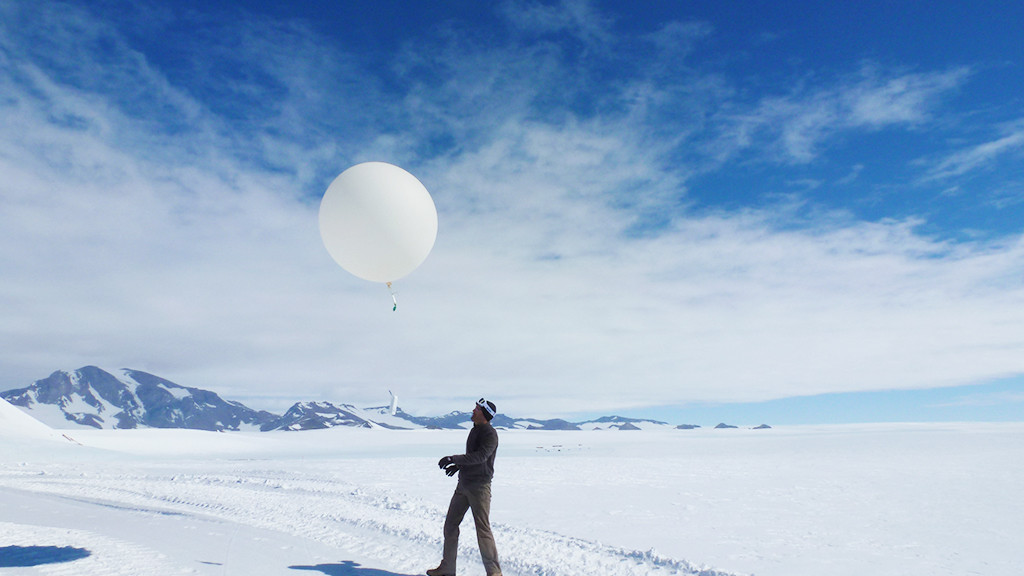 The last projects he has been involved with include AEROCLOUD (a collaboration between KU Leuven, the Belgian Royal Meteorological Institute (KMI-IRM0 and the Royal Belgian Institute for Space Aeronomy (BIRA-IASB), CHASE (in partnership with Ghent University and the Université Libre de Bruxelles ULB)) and ACME (a collaboration between the Belgian Royal Meteorological Institute (KMI-IRM), the International Polar Foundation, and the Swiss Federal Institute for Forest Snow and Landscape Research (WSL)).

You are involved in a number of research projects in Antarctica. Why so many?

I’m involved in several and they mutually benefit each other. I think last season I was involved with three. One is the AEROCLOUD project, which officially ended one year ago, but we left instruments at the station, which are still operational, even during the austral winter. I’m also involved with the CHASE project, which is about atmospheric chemistry and the chemistry of surface snow. This was the third season for CHASE, and there is still another season to do.

The third project I’m involved with is ACME. It was started as a cooperation between the Royal Meteorological Institute (KMI-IRM), the International Polar Foundation (IPF) and the Swiss Federal Institute for Forest Snow and Landscape Research (WSL). It’s a great project because in order to investigate the atmosphere above the enormous Antarctic continent and obtain data to contribute to weather forecasts, you need to collect vertical meteorological information by launching weather balloons. It’s quite an effort (with respect to work, logistics and budget) to continue the measurements, so the involvement of IPF and staff like Benoît Verdin, who has launched the weather balloons during two seasons now, is essential. Several international scientists have already asked for the data collected from these balloon launches, and the data contributes to the work being done for the Year of Polar Prediction (YOPP 2018-2019).

Why is East Antarctica particularly interesting for conducting atmospheric research?

It is an area where not much atmospheric research has been carried out yet. Another point is that PEA is located inland, but not too far from the coast. For our research, which involves studying precipitation, atmospheric chemistry and the transport of fine particles, the location of PEA is very good because it’s influenced by both oceanic air masses brought in by cyclones, but also by katabatic air masses from the interior of the continent. If you go to a coastal station, the meteorological situation is mainly influenced by cyclonic regimes. For this reason, conducting research at PEA is very interesting.

In 2014 the ACME project launched the first weather balloon from PEA. Have you continued the project throughout the years? What data have you collected?

We’ve conducted the ACME project almost all seasons since 2014. Indeed, the first balloon was launched in January 2014. It was quite exciting because it was new for everybody, but it worked well. Then, we continued it for each austral summer season that a research team was at the station. I have been at PEA for two additional seasons since then, and when I left the station, the IPF staff continued to launch weather balloons to collect data to contribute to the project.

Now we have six seasons of data, with data from the months of December, January and February. For some seasons, we also have data from a few days in November, but it depends each year on when the team and equipment arrived. If the weather conditions are good, then staff and instruments arrive earlier. Still, as it is Antarctica, we must be satisfied with the data that we are able to collect during favorable conditions.

Which other scientific teams have used the data that has been collected through ACME?

Scientists from the German Neumayer III Station have used the data to make weather forecasts for the region of Dronning Maud Land in East Antarctica. The radio soundings have even been used from time to time for the local airbases at PEA or Novolazarevskaya. Furthermore, the data has been used by several research groups, including:

We are happy that the data we collected have been shared so widely, and that we could do this additional project together with IPF.

How do ACME measurements contribute to the Year of Polar Prediction (YOPP) of the Worled Meterological Organization (WMO)?

I know the data have been included in the database of YOPP, so, the data is generally available. I know scientists from BAS also used data taken during this period. I am not aware of who else may have used them as they have been shared widely, and they are readily available to anyone who is interested in having them. There is a YOPP overview article in the Bulletin of the American Meteorologcial Society (doi.org:10.1175/BAMS-D_19-0255.1), in which the radio soundings at PEA are mentioned.

While the AEROCLOUD project ended in 2019 and in order to collect data, you installed many different instruments at PEA. What was the aim of combining so many instruments?

The AEROCLOUD project aimed to have a look at how clouds and aerosols influence the climate. On the one hand, you can look at how clouds impact climate. It is more direct because clouds reduce incoming radiation from the sun, but they can also trap radiation reflected from Earth’s surface. On the other hand, the project looked at the fact that the clouds can also bring precipitation, which plays an important role in surface mass balance of the Antarctic Ice Sheet because precipitation is the only way the ice sheet gains mass, so understanding it is critical.

While measurements happened only at one location, when the data are fed into a regional climate model for this part of East Antarctica, the measured data will help the models to become more precise.

When it comes to the aerosols, they are essential because you need particles to form cloud droplets and ice crystals. If we can characterise more precisely the kinds of aerosols that help promote precipitation or to form ice clouds, liquid clouds, or mixed-phase clouds, then this will help the models to be much more precise. One of the most important aerosol parameters is obtained through the Cloud Condensation Nuclei (CCN) instrument, measuring the number of particles able to form cloud droplets. It helped to improve a regional climate model for East Antarctica. The aim of our project is to continue with such measurements and  modeling studies.

How will the findings of your research help to delineate future climate change projections? Will they contribute to future Intergovernmental Panel on Climate Change (IPCC) Assessment Reports?

Our findings can be seen as a small piece of a very large puzzle. But even small contributions are needed to see the big picture. Other scientists use our data for simulations, and then other scientific groups use these simulations for their projects. From my experience in the atmospheric science community, scientists work really well together. They are always willing to help each other.

You and your colleague Quentin were not always on-site during every season. How did the BELARE team assist you with the many instruments you had installed?

The BELARE team really helped. However, first and foremost, they had to be trained to know what to do once Quentin and I left. Some instruments just need to be checked and maintained occasionally to continue to collect data, while others need more considerable attention (e.g., calibrations, minor repairs, refilling of working liquid).

This situation improved considerably once the remote communication connection was stably established. Since then, we’ve been able to manipulate or supervise our instruments from Belgium and notify the PEA team about actions that need to be taken.

An important task for the IPF team has been the launching of the weather balloons. They prepare the balloon before launching it, take the time to collect data, stop the measurements, and check the data afterwards. It required major commitment as well as some working hours, but I had the impression that the crew liked doing it. Launching a balloon is something more engaging than just switching on an instrument.

Since you come back to Belgium, have you had any difficulties in working on your research projects due to the limitations caused by coronavirus?

I didn’t experience direct limitations. Everything is still going on as a lot of science work is at the computer so I could still work online. The reason why I hope we can go back to a normal situation quite soon is that it is challenging to plan the next year’s Antarctic campaign, especially if you cannot talk directly with your teammates. If you do the whole organisation online, it gets a bit difficult. If you can all sit around the same table, you can easily exchange and discuss ideas.

Also, if you are required to work at home all the time it can be difficult to concentrate, especially if your children need help with, e.g., their math homework or some IT issues!

What are your plans for the next seasons? Are you planning to return to Antarctica soon?

We plan to send two people to PEA for the CHASE, ACME and CLIMB projects next season. I don’t think I will be part of the team going to Antarctica, but I hope to get the opportunity to go back to PEA one day as the time I spend there is always unique and fascinating.