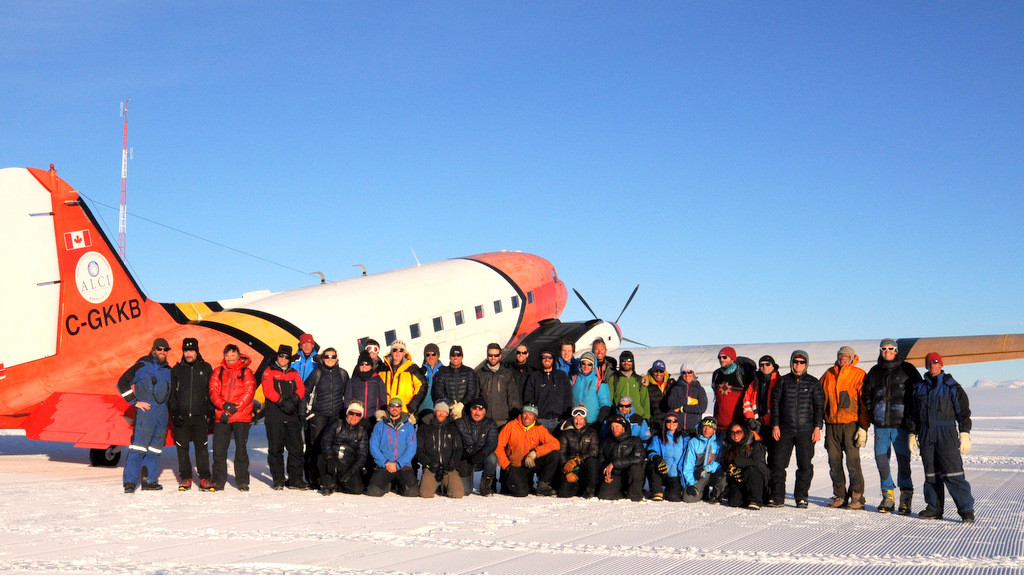 In the coming weeks, operations team heads will work on preparing reports of the 2018-2019 season, while some team members will return to their regular jobs almost immediately.  Some of the team planned a weekend reunion in Chamonix last week to carry out an unofficial de-briefing of the season.

"We just completed the tenth summer season of operations at the Princess Elisabeth. What amazes me the most is that this season was different from any other," said expedition leader and International Polar Foundation President Alain Hubert upon his return. "Conditions are unpredictable in Antarctica, and the team had to face new challenges in order to be able to support the various scientific projects which took place over these last four months. The enthusiasm and energy of the fantastic team was the secret to our success!"

The station has grown

During this past season, the Work Programme was completed ahead of schedule. During the first team rotation, the South Annex Phase II fit-out was virtually completed, after its construction last season.

The newly completed annex has 16 bedrooms that can sleep two persons each, which restores the 32-berth capacity to the annex to the station. If you add this to the original 16-bed capacity of the upper part of the station, it’s now possible for the Princess Elisabeth Antarctica to host 48 people in the Station buildings, not counting the mobile units.  However, some hardy individuals still choose to spend their season sleeping in tents, pitched to the West of the Station in an area protected from the wind.

The new annex also includes an additional toilet and bathroom, as well as a storage area on the lower level of the annex. The snow melter - which provides the station with fresh drinking water - was also moved from the outside the station to inside the South Annex Phase II, which has drastically reduced heat losses and has improved the water production capacity. This capacity was tested this season when occupancy climbed over 50 on certain days this season.

Accommodating so many people sustainably

The zero-emission concept was originally designed for 16 people, and so some upgrades to the station’s systems have become necessary in order to accommodate additional guests.

Systems engineer Aymar de Lichtervelde spent three months at the station this past season working on doubling the capacity of the station’s water treatment system so it can handle as many as 50 occupants.  While it took some time for Aymar to become familiar with the station’s water treatment system, he was able to improve its functionality and significantly increase the amount of grey water (from showers and laundry) and black water (from toilets) that can be treated.

Meanwhile, electromechanical engineer Guus Luppens - who built the first off-grid house in Belgium, (which he proudly lives in) - spent some time working at the station this season. In addition to replacing the station’s battery systems and doing other maintenance tasks on the station’s renewable energy systems, he began devising a plan to increase the renewable energy production at the station. Over the coming seasons, this plan of action will be implemented.

The BELARE team is once again rising to the challenge of increasing the capacity of a station located in one of the harshest environments on the planet and doing so in a sustainable manner.

Before the team leaves each season, they must take time to prepare the station, the vehicles, and the equipment to spend a harsh austral winter in Antarctica.

Thanks to a new hangar that the BELARE team constructed this season at the Winter Park, located 2 km from the station, vehicles and equipment will have some protection from the elements. This will also save several days of work next season, as the team will not need to dig the vehicles and equipment out from beneath huge piles of snow that accumulate in front of the station garages over the winter.

Although the station is now in winter mode, it can be monitored from Belgium thanks to the satellite link that was established with the station ten years ago.

During the 2018-2019 season, the station’s satellite system received some significant improvements to make the link with the outside world faster. The team installed two new block up converters for the main SES satellite link. These modems consume less power and provide higher stability. The antenna was also repositioned in order to lock on to the new SES-5 satellite.

During the season, the satellite system allows scientists to send data from their installed instruments back to their research institutions, and for team members to communicate with their families and friends back home. Although the station is in winter mode, it is designed to monitor the station’s renewable energy systems from a distance, as well as transmit data from weather monitoring and other scientific instruments at the station to researchers in Belgium and elsewhere.

While preparations are already underway for the 2019-2020 season, we will continue to post information about the various scientific research projects that took place during the 2018-2019 season and to get some feedback from other members of the team.