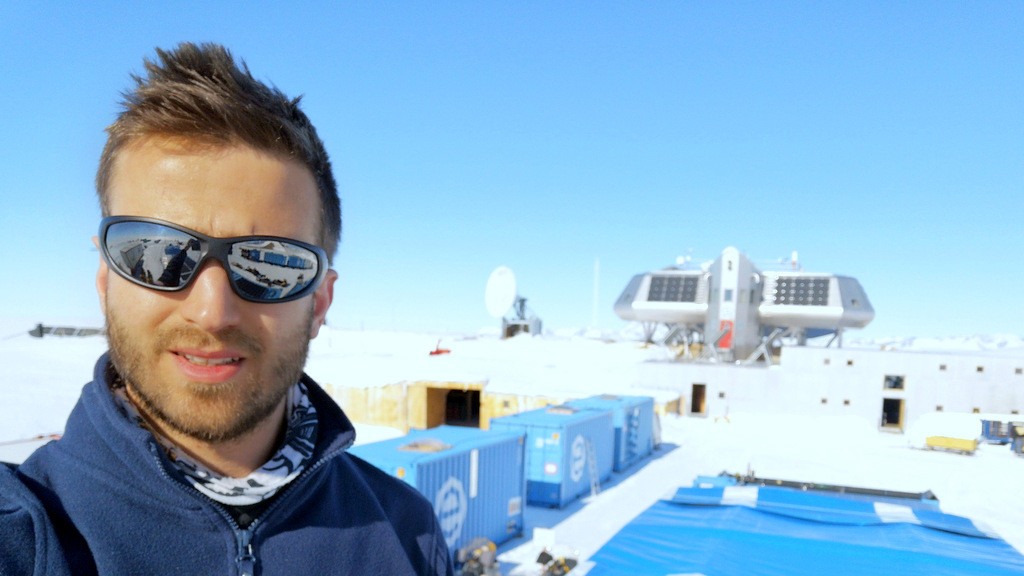 How did you get the job with IPF to do work at the Princess Elisabeth Antarctica?

I answered a job advertisement a few months before the start of the 2018-2019 season. The Princess Elisabeth Antarctica station is powered by exactly the same battery system that powers my house, which I built in the last few years.

My house is the first in Belgium to be completely off-grid, meaning that it's not connected to public electrical grid at all. It runs just on solar power and batteries that store energy for times when there isn't enough sun to produce energy.

Therefore the International Polar Foundation was excited to have me be a part of their team in Antarctica this season.

Did you have to hit the ground running when you arrived?

There was not a lot of time between when I first answered the job advertisement to starting to work for IPF at the station in Antarctica. So I had a lot to learn in a short amount of time. But the challenge was definitely worth it for the experience!

What were your tasks at the station this past season?

When I arrived at the beginning of the season in November 2018, I spent a lot of time getting to know the station systems. The last few engineers had been there for a long time, so they knew the station systems very well. But I found that there wasn’t much information about the station’s renewable energy systems.

I spent the first few weeks mapping photovoltaic circuits and checking to see if they were functioning. Together with some team members, we replaced any modules that were broken. I also checked the inverters and the circuits and made a complete inventory of all the circuits of the renewable energy systems of the station.

Did you also handle the solar thermal energy systems?

You also had to change the batteries that store energy produced by renewable sources. Why was this needed?

The next main task I had was to change the batteries that store the energy produced by the solar photovoltaic panels and wind turbines. They’d already been there for six years, so it was time to change them. They'd reached the end of their functional life.

We noticed that there were a few problems with the batteries’ circuits. We performed some tests to determine which batteries in the setup were not performing as well.

This allowed us to learn that we don’t need to change as many batteries in the system as often. Now we’ve learned how we can keep the batteries for a longer time without having to change them all at the same time like we’ve done this season. In case any batteries go out, we'll be able to shift to using only batteries that are working. This means less waste.

Is it possible to make the station’s energy systems work for higher occupancy?

The station was originally designed to house 18 people. But this past season, we had as many as 40 people at the station at one time. So the station needs to be able to produce more energy to welcome more people in the coming years. I'm in the process of designing a roadmap for how to increase renewable energy production and energy storage at the station.

In order to do this, we’re looking at using the latest technologies. In the last few years, battery storage technologies have improved dramatically, which means we'll be able to store more renewable energy for longer periods of time. We plan to install these over the coming years.

So we looking at how we’re going to approach this. Already next season (2019-2020) we plan to add a significant amount of solar power.

Did you lend a hand to any of the scientists during your time at the station?

I went with many scientists into the field to install small, mobile solar and battery-powered systems to power scientists' instruments. I helped Dr. Kate Winter install a power supply system for the Raspberry Shake seismometer she's using in her field research there. I also went with my colleagues further into the field to install or maintain solar power systems for weather stations.

You managed to build a house in Belgium that's completely off-grid. Do you think it's possible for people in Europe and elsewhere to do this?

It's always possible, if the house is designed not to be connected to the power grid form the start. If you have devices in your home such as a heat pump that consume a lot of energy in winter, when there's not a lot of solar energy production, then it can be hard. But you have to engineer the house to get around the need for high energy-consumption situations when there is less renewable energy available.

I've already lived two winters in my house without any energy shortage problems. This is pretty impressive since I live in a country that's known for not getting a lot of sun!

Did you need to get a special permit to build a house that's completely off-grid?

There's no law in Belgium that says you need to get a special permit to build a house that's completely off-grid. You can also have a connection to the public electricity grid in Belgium and not use it. It's completely up to you.

I know that there are some countries, or certain municipalities in certain countries, that don't allow you to build a house that's completely off-grid, due to specific zoning laws. Belgium is ahead of the curve in this regard.

But as you can see, Belgium is also ahead of the curve in Antarctica. It's already been ten years that the Princess Elisabeth station has been running on renewable energy, while all the other stations are still running on diesel-powered generators!

Was it expensive to design and build an off-grid house?

You have the initial investment to install the renewable energy producing systems. But these costs are made back over time as you don't pay any electricity bills.

In the coming years, I'll be happy to continue lending my know-how to upgrading the Princess Elisabeth station's renewable energy systems.