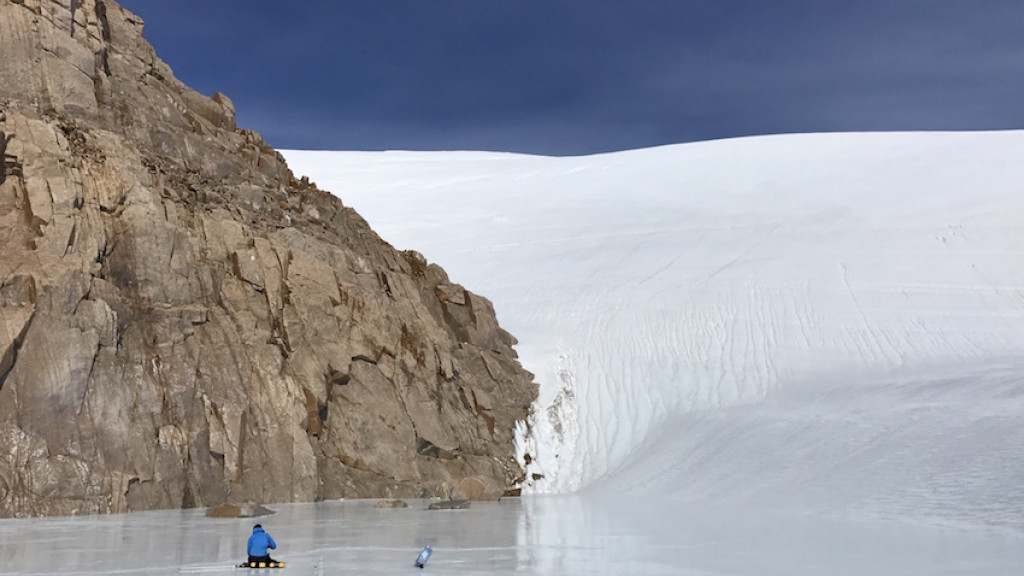 Dr. Lori Ziolkowski and Dr. Stefanie Lutz, travelled to the Princess Elizabeth Antarctic Research Station (PEA) in early 2017 for their first field season. The weeks before departure were busy with medical evaluations, preparing sampling gear, and everything else needed to survive and lead a successful scientific trip in one of the worlds most extreme environments.

The overarching goal of Lori’s REMACA project, supported by the Baillet Latour Antarctica Fellowship and the International Polar Foundation, is to discover what types of life forms live around PEA and how active this life is. Previous studies have found ample evidence of microbial life on rocks, in the rocks, in ice-covered lakes and in the soil. But it remained unclear how active these microbes are. The climate of East Antarctica is harsh by temperature standards and these conditions are known to limit microbial activity elsewhere, like in the high Arctic.

But to the great surprise of Lori and Steffi, life is almost everywhere around PEA. By the end of their field trip, they had more samples than originally planned. Samples were collected from soils, rocks, ice, and even lakes. Most lakes around PEA are covered with a meter of ice because air temperatures do not go above freezing, so it was surprising to find one lake partially ice-free. In this open water lake, they found macroalgae, similar to seaweed, and green cyanobacteria mats.

The most hospitable place for a microbe trying to survive in Antarctica’s harsh environment is actually inside the rock. Endoliths are a type of microbe that lives within rocks. When a rock is broken into pieces, one can typically see a line of green pigment and that green pigment is where microbes have been harnessing the suns energy through photosynthesis. Scientists often study endoliths because they may give us clues as to where life on other planets like Mars may exist. In the region surrounding PEA, microbes were found in most rocks.

Much of the field effort was also focused on studying cryoconites.  Cryoconite holes are circular holes in glacier ice. Microbes also find these holes a hospitable place to live because they often contain melted water. In the Arctic, Lori and Steffi have studied and found cryoconites that are open to the atmosphere and have no ice cover. Typically, in Antarctica the cryoconite holes are ice covered and those around PEA were usually covered with 8-10 cm of ice.  Multiple cryoconite samples from many locations around PEA were collected to determine local and regional variability in the composition of the material within these cryoconite holes.

Now that Lori and Steffi have returned to their labs, first sampling adventure over, the real work of analyzing samples begins. Over the next six months, they will process samples to find out which organisms are living in these samples and how active these microbes are. This will provide valuable information about what type of sampling should be conducted in 2018, their next field campaign. Lori and Steffi are excited to start working in the lab, to see what they find so they can begin making plans for the next trip!