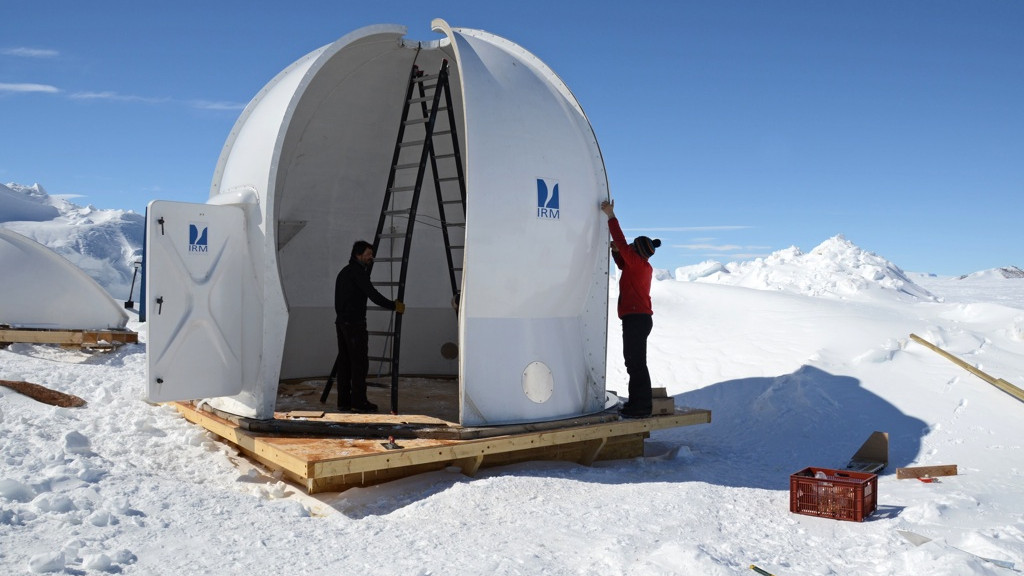 The expedition to the coast was really successful. Despite a few problems with the drill, scientists from the Glaciology Laboratory at the Université Libre de Bruxelles (ULB) working on the IceCon project were able to extract a number of ice cores on the King Baudouin Ice Shelf at the coast in East Antarctica, 200 km away from the Princess Elisabeth station. Although they were hampered by bad weather and a stuck drill, the team was able to take a few ice cores from the ice shelf, including one as deep as 107 meters. The team also took a series of radar measurements of the ice shelf to get an idea of what the ice is like beneath its surface. In addition to collecting plenty of data to go back home with, the IceCon team also installed a live-tweeting automatic weather station on the King Baudouin Ice Shelf, which gives regular updates on the weather and how fast the ice is flowing!

Jan Lenaerts, the laureate of the 2014 InBev-Baillet Latour Antarctica Fellowship, who is studying surface melt of ice shelves in East Antarctica, travelled to the King Baudouin Ice Shelf with the IceCon team to start research on the BENEMELT project the Fellowship is funding. In addition to taking a number of firn cores along a transect of the ice shelf, Jan was able to set up an automatic weather station (AWS) at the grounding line of the ice shelf. The AWS is currently transmitting weather data to the Princess Elisabeth station, which then relays this weather data via satellite antenna to Jan at Utrecht University in the Netherlands. He's keeping a close eye on what's happening in Antarctica, as he'll be heading back next season to do more research funded by the Fellowship. Overall, it was a very successful season for Jan.

This season, seismologist Denis Lombardi from the Royal Observatory of Belgium unfortunately had to deal with a few defective data loggers in the seismic stations installed in a number of different locations in the vicinity of the Princess Elisabeth station. While he was disappointed that faulty electronics had caused the data loggers to malfunction, the station's logistical team was there to help him. They managed to replace some of the data loggers and install a few new seismometers, so the collection of seismic data in the region could continue.

Meanwhile, back at the station, Quentin Laffineur and Alexander Mangold from the Belgian Royal Meteorological Institute (RMI) continued their observations of ozone, aerosols, and cloud-forming particles using instruments already installed at the station for a few years, as well as a new instrument brought from Leipzig University in Germany. Throughout the entire season, the station team launched a meteorological balloon every day for the RMI scientists to take measurements of the atmosphere in a vertical column from the ground to the stratosphere, 30 km up!

The construction of a brand new geomagnetic observatory fro the GEOMAG project was also an interesting challenge for the station team. Built over a few weeks, the shelter that now houses instruments that measure Earth's magnetic field had to be constructed without using any magnetic materials to avoid any possible interference with the magnetic field measurements. The station team helped Stephan Bracke from the Geophysical Center of Dourbes set up two instruments in the completed observatory, with a third instrument invented by scientists in Dourbes called Autodif to be installed next year.

A Belgian teacher in Antarctica

As he and his class were awarded 1st prize in the second edition of the Polar Quest competition, Electronics teacher from the Athénée Royal d'Ans Roger Radoux spent several weeks in Antarctica this season. Roger was able to learn about how the Princess Elisabeth station uses renewable energy to run, and how energy use at the station is managed to maximise energy efficiency.

During his time at the station, Roger Skyped with his students back in Belgium, teaching them what he learned about how the station works and life in Antarctica. He was also lucky enough to take part in a few field expeditions during the season. So he was able to experience Antarctica to the fullest!

One highlight of the 2014-15 season was visiting the emperor penguin colony on the Princess Ragnhild coast for the third time, to see how the colony was doing. International Polar Foundation President Alain Hubert confirmed the existence of the penguin colony in late 2012, after a team of British scientists had found evidence supporting its existence via satellite imagery some years before. Alain and Belgian reporter Jos Van Hemelrijck paid a visit to the colony this season for the third year in a row, and they colony is doing very well.

Geophysicists from the Alfred Wegner Institute (AWI) were also operating from Princess Elisabeth Antarctica this year, conducting aerial geophysical surveys of the bedrock of Antarctica from their Polar 6 research plane. While flying one of their missions, they spotted a massive circular structure on the King Baudouin Ice Shelf. At first, they hypothesised that the structure might have been caused by a meteorite impact. However after scientists form around the world commented on the story on social media, a more convincing explanation emerged after conversations between scientists on social media: an ice doline. We will be following the developments of this story closely, as collected data are analysed in Germany. Jan Lenaerts plans to visit the structure next year to have a clear look at it.

Regardless of what the structure turns out to be, Alain and the station team were happy to welcome a number of German VIPs to the Princess Elisabeth station for a short impromptu visit in mid-January. The Germans were very impressed with the comfort and convenience that a scientific research station in Antarctica can afford scientists, including scientists from the Alfred Wegener Institute!

And in late January, a 70 km2 chunk of the King Baudouin ice shelf broke off and started drifting out to sea. It created a bit of excitement because, according to ULB glaciologists, this is the first time since the 1960's that this ice shelf lost so much ice.

Successes for the technical team

The big achievement of the year for the technical team was the rebuilding of the main garages. Originally built on ice that slowly flows around the Utsteinen Ridge, it was time to find a more permanent engineering solution.

They devised a system in which the new garages are supported by three 17 metre-long timber beams anchored to the rock of Utsteinen Ridge on one side, and can slide on adjustable platforms anchored into the ice. The platforms will drift with the ice, with the beams sliding upon them. The height of the platforms can be adjusted year after year, which ensures that the building will remain level even as the ice moves. Over time, some new support platforms may have to be built, but that will be an easy job for the team of highly skilled professionals who take care of the Princess Elisabeth station.

For our chief mechanic Kristof Soette, the highlight of the season was certainly the arrival of two Toyota Hiluxes he had customised himself. The new vehicles proved to be very useful as soon as they went into service. The Hiluxes allow scientists and members of the logistical team to travel more quickly on a wide variety of difficult terrains. They are certainly a sight to see in action!

And speaking of a sight to see, the first drone flight over the Princess Elisabeth station took place during the 2014-15 season.  It was able to record some impressive views of the station and surrounding landscape from never-before-seen perspectives!

Alain would like to give special thanks to all who made the 10th BELARE season such a successful one, especially the team in Antarctica. They can't wait to return to Antarctica next season!

Media: © Members of the BELARE 10 team building a new geomagnetic observatory for the Royal Observatory of Belgium.