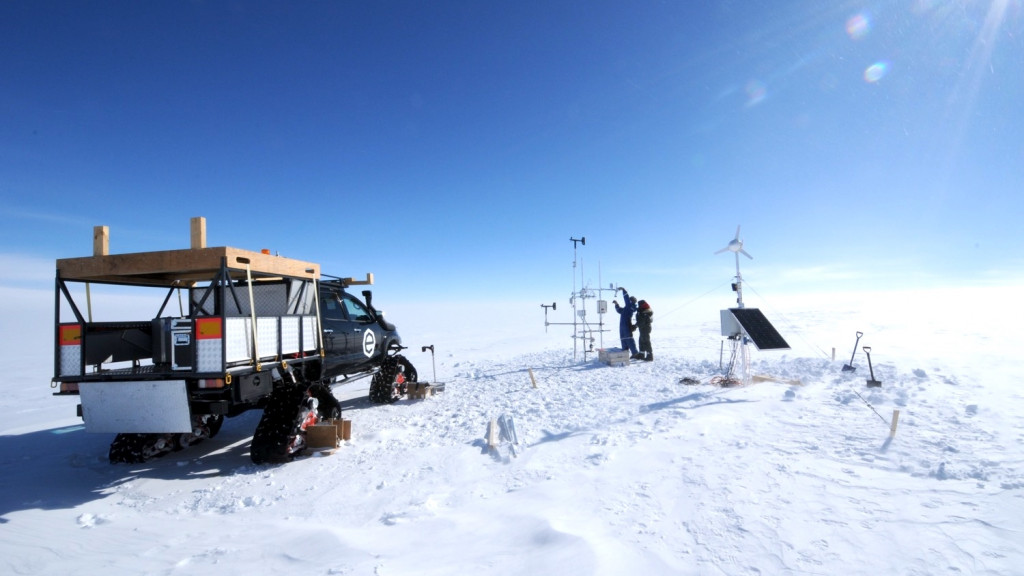 One of the first milestones the current season in Antarctica has been the arrival on November 21st of the first intercontinental flight from Cape Town to the newly constructed Perseus Airstrip. This airstrip is located just 60 km from the Princess Elisabeth Antarctica. The flight brought the first team of scientists of the 2019-2020 season from the CHASE, MASS2ANT, POPE, and LOSUMEA research projects, as well as a team of Japanese scientists.

Having an Intercontinental Airstrip so close to the station makes it possible for an Ilyushin cargo plane flying out of Cape Town, South Africa to land within a few hours' driving distance of the Princess Elisabeth Antarctica by modified Toyota Hilux. This allows scientists traveling to the station to avoid the need to take a feeder flight from the Russian Novolazarevskaya base (as had been the case in previous seasons), which reduces the overall cost for scientists to conduct their field missions in Antarctica.

After ten years of service, the station’s garage is getting a complete overhaul. Over the last decade, the ice upon which the garage was originally constructed in 2008 has shifted and receded enough that it has started to warp the structure of the garage. So it was decided to build a completely new garage. Once completed, its position can be adjusted as the ice underneath it moves.

The new garage's structure will be anchored to the granite ridge that the main body of the Princess Elisabeth station is built upon. It will be able to swivel on a hinge so its position can be adjusted as the ice below it shifts and diminishes. The team is placing pistons on the western side of the garage so it to be lifted each season as the ice below it recedes, ensuring that the garage will remain level.

The majority of the old garage has already been torn down and the anchor point of the hinge put in place. During the second half of the season, the new garage will slowly be put together, recycling as much wood from the old garage as possible to reduce waste. We can't wait to see what the final product will look like.

Most of the scientists scheduled to conduct research during the first part of the season got straight to work soon after their arrival. At the beginning of the season, the Princess Elisabeth Antarctica hosted scientists from the Japanese Antarctic Research Expedition (JARE) for a few days before they headed off to conduct a geological survey in the the northern part of the Sør Rondane Mountains. And then from the end of November until a few days before Christmas, scientists from the CHASE, MASS2ANT, POPE and LOSUMEA projects used the Princess Elisabeth Antarctica as a base for their field work.

The CHASE team collected atmospheric particle samples from their field instruments in their mission to determine what kind of organic and inorganic particles are found in the atmosphere there (and to what extent pollution from the rest of the world reaches Antarctica). With the help of the station's technical team, they performed maintenance on their instruments. Even after their departure, a member of the IPF station team, Benoît Verdin, will continue to take atmospheric particle samples until the end of the season.

Accompanied by profesisonal field guides from the IPF station team, the MASS2ANT scientists travelled to the coast to take certain snow and ice parameter measurements at the ice rises where they drilled ice cores during the last two field seasons in their quest to better understand ice mass balance in East Antarctica.

The station also team assisted scientists from the POPE project, which is looking at the interactions between clouds, precipitation and complex terrain in Antarctica, to collect data using a wide variety of instruments. Two engineers currently working at the station - Guus Luppens and  Johan De Muylder - constructed mobile solar-powered units that allowed scientists from the Federal Polytechnic University of Lausanne (EPFL) working on the POPE project to run radar equipment they used to take field measurements on 100% renewable solar energy. This made it possible for them to forego using a diesel-powered generator and the 50 litres of fuel a day required to poser such instruments in the field.

Station team technicians also rebuilt and moved equipment to measure snow drift for the LOSUMEA project, which focuses on snow accumulation, transport and erosion processes to understand and quantify local changes in the mass balance of the Antarctic Ice Sheet, A scientist for the project is at the station for the majority fo the 2019-2020 season.

Most scientists left Antarctica in time to be home for Christmas, although a few have stayed behind to continue taking measurements.

In January, the station crew will welcome a fresh batch of scientsits, including 2018-2020 Baillet Latour Antarctica Fellowship Laureate Dr. Kate Winter from the Univeristy of Northumbria to complete the second of two research seasons for her BioFe project. Everyone is excited to attack the second half of the season.

More detailed news and a number of photo galleries taken by scientsits and staiton crew alike can be found on the Princess Elisabeth Antarctica website. Make sure to have a look!