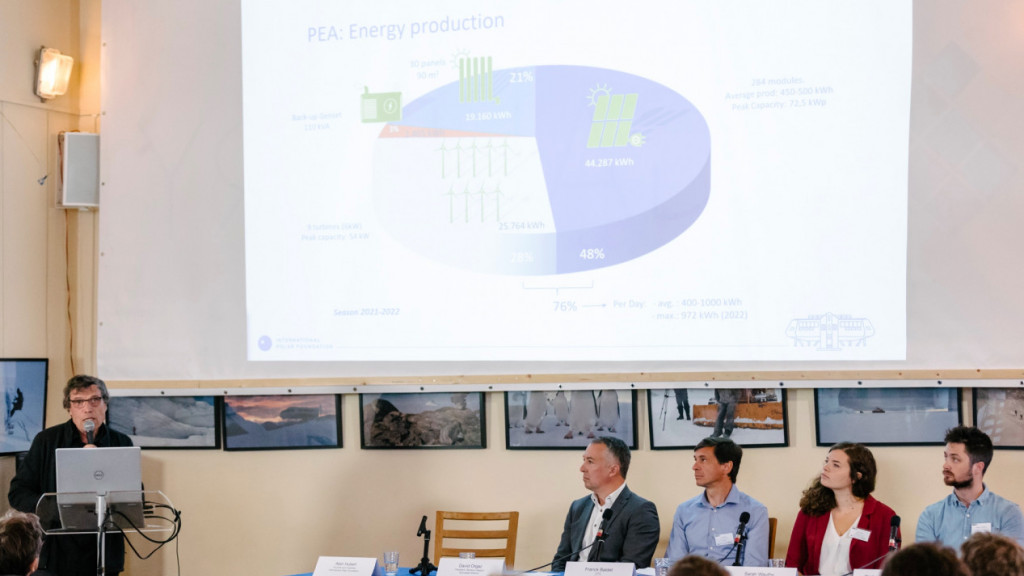 Dozens of people attended an opening press conference at Atelier 29. During the press conference, which was also streamed live, IPF Founder and Chairman Alain Hubert and Schneider Electric President for the Benelux Region David Orgaz D’Hollander discussed the design and implementation of renewable technologies at the polar research station. Innovations at the station include its passive design, its renewable energy production and storage, its expanded water treatment system, its smart microgrid, and its programmable logic controller, which manages how energy is used at PEA.

Venturi Chief Technical Officer Franck Baldet told the story of how the Venturi Antarctica was born from an idea that Prince Albert II of Monaco had following his visit to polar research stations across Antarctica in 2009 (including the Princess Elisabeth Antarctica). Disappointed that researchers used only polluting vehicles to get around, Venturi was tasked with creating a solution to remedy that problem.  Since then, scientists working at the Princess Elisabeth Antarctica have been using it in some of their field missions and IPF crew has used it to haul heavy loads!

The press conference also featured three scientists who have taken advantage of the zero-emission station as a base from which to conduct their research. Glaciologist Sarah Wauthy (ULB), atmospheric chemistry scientist Preben Van Overmeiren (Ghent University), and Kate Winter (Northumbria University) all explained what it was like not only to live at the zero-emission station, but also to get support using renewable energy solutions such as solar panels and small wind turbines to powere instruments in the field, as well as to take a ride in the Venturi Antarctica.

Following the press conference, in-person ttendees were able to learn more information about the PEA station and the Venturi Antarctica at workshops hosted by each of the partners. The event ended with a networking lunch.

Everyone also had a chance to see an exhibition of 20 photos of beatiful Antarctic landscapes to celebrate IPF's 20th anniversary. The exhibition is still on display in the main hall of Atelier 29, so stop by sometime to have a look. If you like some of the photos, you can order photo prints and postcards by contacting us at events@polarfoundation.org.

All proceeds form the sale of the photos and postcards will go towards supporting polar science.