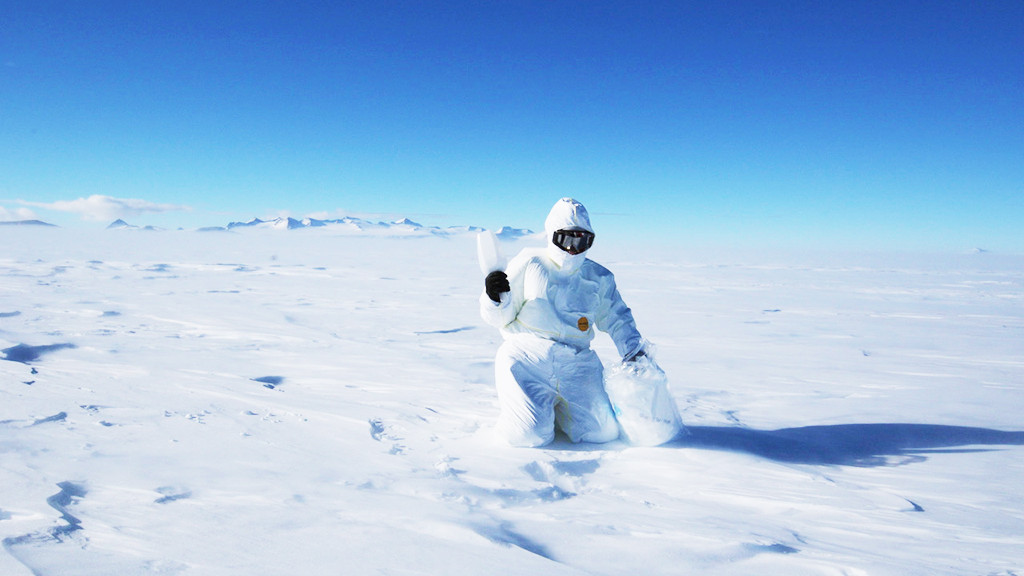 What are the objectives of the CHASE project?

The acronym CHASE stands for Unravelling particle CHemistry in Dronning Maud Land: from Atmosphere to SurfacE snow. CHASE is a project that has been financed by BELSPO, and it has four main partners who are the Université libre de Bruxelles (ULB, Belgium), the Vrije Universiteit Brussel (VUB, Belgium), Ghent University, Belgium and the Royal Meteorological Institute (RMI) of Belgium. Each of them has a crucial role because they all have different expertise.

CHASE has two goals. One of them is to provide details about the physical and chemical characteristics of atmospheric and surface snow particles. Ghent University is in charge of studying the organic particle composition (meaning they contain carbon) with the help of its organic chemical group. Then there are the inorganic particles, which are primarily mineral dust. This is what I am in charge of studying at the Université libre de Bruxelles (ULB). The second goal of CHASE is to investigate the atmospheric transport pathways. This is what the Royal Meteorological Institute (RMI) is in charge of.

This part of Antarctica is interesting to study because atmospheric particle composition and particle transport through the atmosphere had never been studied there before, especially where the Princess Elisabeth Station is located. Up to now, there is no database on the trace element or isotopic composition of atmospheric particles in this part of Antarctica. So we decided to carry out this research project to fill this gap in knowledge.

Why is the CHASE project intriguing for you as a scientist?

Because Antarctica is supposed to be the most pristine place on Earth, with very little influence from human activity. However, our research shows that influence is larger than expected.

When we study the chemical composition of the natural and extreme environment of Antarctica, we can evaluate and quantify the quality of the air. In addition, by studying the geochemical and isotopic signatures of these atmospheric particles, we can identify their origin: certain regions in the Southern Hemisphere. Consequently, we can extrapolate information about atmospheric particle composition and transport of those particles in other parts of the world. This allows us to see how contaminated or not the atmosphere is in Antarctica compared to other parts of the world. At the same time, Antarctica is one of the places that has the most pristine and undisturbed climate records in ice cores. We can compare the atmospheric particles we’ve found with those found in ice cores, which unfortunately are not so plentiful.

The CHASE project will provide a new dataset that will help to improve the knowledge that we have about how the air masses transport organic and inorganic particles to Antarctica. These particles contain micronutrients that nourish phytoplankton in the ocean. We can also trace the different sources of both natural and anthropogenic particles in Antarctica, how abundant pollutants are, and how they reach Antarctica.

Why use active and passive sampling of both organic and inorganic atmospheric particles?

Active sampling by high-volume pumps is only done during the austral summer research season, which is from mid-November to February, when the Princess Elisabeth Station is open. Because the overall particle amount in Antarctica is very low, we still need one whole week of continuous high-volume air flow for the collection of one single filter sample.

For the passive sampling (i.e. no pump is used), different passive sample methods and sample devices are used respectively, for organic and inorganic atmospheric compounds.

The passive sampling technique for ambient-air particle collection for inorganic compounds was based on the use of Sigma-2 passive-samplers, which are placed at 2.5 m above ice/snow level on aluminium poles. The Sigma-2 samplers are cylinders with slits at the top part, which guarantee a wind-sheltered and low turbulence air volume inside the Sigma-2 sampler. Inside a specific filter support is placed for collecting the particles. These passive samplers are placed along a transect at several sampling sites from the vicinity of the Princess Elisabeth Station to the coast. The filters passively collect atmospheric particles over the course of an entire year. The filters are replaced once a year, when our team goes into the field during a BELARE expedition season.

The 2019-2020 season was the third time for the CHASE team at the Princess Elisabeth Station. How did the research program move forward during the past season?

We were able to do everything we needed to do for our project. The weather was more favourable compared to previous seasons. It was warmer with fewer storms. At the same time, during the last season, we performed a pre-test of some shallow ice-cores for future projects.

You re-visited seven passive sampling sites during the last season that had been set up during the previous season (2018-2019). Why were these sites chosen?

How did you find the logistical support you received during your time in Antarctica?

It was awesome. I have already done two seasons at the Princess Elisabeth Station, and the IPF BELARE team is excellent from the beginning to the end. Whatever we might need or miss, they solve it.

What have you done with the atmospheric samples since returning to Europe? Has the pandemic interfered with your research in any way?

We’ve already been able to analyse both organic and inorganic samples taken during the 2018-2019 research season. The results are going to be published soon in an international scientific journal. All I can tell you at the moment is that they are very promising.

During the first season, the samples arrived in March, but the pandemic this year delayed the transport of the samples, which meant they only arrived in mid-June this year. At least they were safe and frozen, which is the most important and crucial point, as it is a long way from Antarctica to Belgium. We will analyse these samples to write and interpret data from the last seasons.

What will the next steps be for the CHASE project? Do you plan to return to Antarctica in the coming years?

If the Covid-19 pandemic allow, there will be fourth and last Chase season at Princess Elisabeth during austral summer 2020-2021. Further, it is my understanding that the PIs of the project would like to continue with another project in line with CHASE, but for that, a new proposal needs to be submitted to get more funding. Mainly they would like to do long-term monitoring of organic and inorganic samples in this part of Antarctica.

Concerning myself, I soon plan to head to Princeton University in the United States. But I hope to return to the Princess Elisabeth Station in the future. Living there is totally different from anything else in the world!

Are there links between the CHASE project and the Intergovernmental Panel on Climate Change (IPCC) review, or the Year of Polar Prediction (YOPP)?

Yes, there are links to both. For the IPCC review, the CHASE project is looking at atmospheric transport of mineral dust, which can be used to trace pathways of atmospheric circulation. You can link past atmospheric circulation that we know about with atmospheric circulations of today's climate and see if and how it will change in the future. For that, what scientists do is, to drill very deep ice cores, because in these ice cores you have some layers of particles, and you can analyse these particles to determine where on the planet they originally came from. The further you drill into the ice, the further back in time you go.

Concerning the Year of Polar Prediction (YOPP), the analyses of the organic compounds and metal concentrations in aerosols within the CHASE project are relevant, as organic or metal-bearing particles are potentially more often pollutants. If the organic compounds originate from Antarctica itself, then it means that we are polluting Antarctica as well. This is an interesting point to consider.

As an early career female scientist, do you believe it is important to encourage young women who are starting their higher studies to pursue careers in STEM subjects (Science, Technology, Engineering and Mathematics)?

I believe it is very important. Encouraging girls and young women to pursue a career in STEM subjects can really make a difference. While exposing them to STEM subjects is important it is also essential to support them. This support means building self-confidence, which must come from every environment: home, work and school. We have a long way to go in order to obtain full equity between men and women in STEM fields. But we need to get there.

Over the weeks I was at the station during the two previous seasons when I was in Antarctica, I was one of only three women present, and I was the only scientist (the other two women were the cook and the doctor). We also took a picture at the airport in Cape Town of the team leaving for Antarctica, and I was the only woman surrounded by more than 20 men. When I saw the picture afterwards, I was not shocked, but I realised that this is how things currently are. There are not many women who go to Antarctica right now, and we must change that.