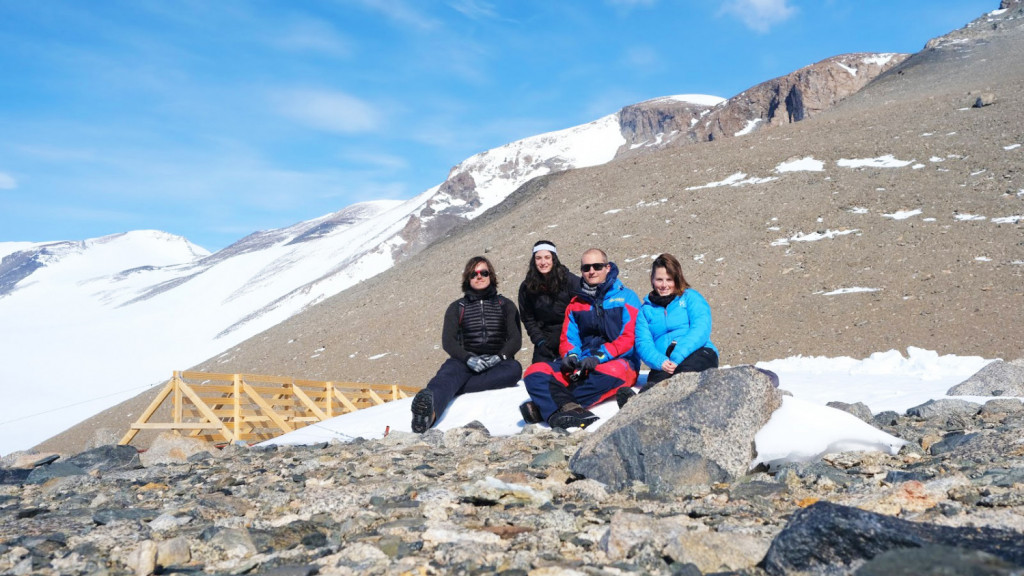 The MICROBIAN team, returned to the Princess Elisabeth Antarctica Research Station for the third consecutive season. This year, the team was composed of Valentina Savaglia, Quinten Vanhellemont, Beatriz Roncero Ramos, and Juri Klusak. They spent four weeks around the station mapping soil habitats using drones and taking samples of microbial communities that were brought back to Belgium at the end of the season.

MICROBIAN is a research project financed by the Belgian Federal Science Policy Office (BELSPO), in the BRAIN-BE program.

The MICROBIAN project returned to the Princess Elisabeth Antarctica for a third consecutive season. What were the objectives of the mission this past season?  How do they fit into the overall objectives of the project?

During the 2019-2020 season, the MICROBIAN team concluded fieldwork as it was the last field campaign to the Princess Elisabeth Antarctica for the project. The main goals were to finish taking samples from open-top chambers and snow fences that were installed during the first year of field campaigns and during earlier projects and to map the different nunataks around the station.

On the first and second field campaigns (2017-2018 and 2018-2019), much time was devoted to exploring the area and taking samples of microbial communities from the nunataks around the station in order to document their biodiversity and functional characteristics. This year, we used a drone to map the nunataks. The data we collected will help us understand the physical characteristics of these terrestrial habitats. The very high-resolution mapping of the nunataks we did was crucial for our project as the microorganisms we are studying form inconspicuous biocrusts and biofilms, and the topography of their habitat needs to be surveyed in the most detailed way possible in order to understand and predict the conditions favouring their development. We also monitor local temperature through miniature recorders that are replaced each year.

As for the open-top chambers and the snow-fences, these are more long-term in-situ experiments mimicking altered climate conditions and the duration of snow cover. Samples of microorganisms will be taken from them again in the future in follow-up projects as we would like to monitor the trajectory of the communities for many years. The MICROBIAN project initiated these long-term monitoring studies, but there will be other follow-up projects in the future hopefully.

What were some of the highlights of your fieldwork this season?

This year was exceptional because of the weather. It was very sunny most of the time and there were almost no storms at all. In previous years, we often experienced intense storms, which forced us to stay inside the station and lose precious time. But this season we could accomplish a lot.

The field guide from the BELARE team was very helpful to us for our field work. Thanks to him, we could work every day and almost every Sunday. It was exhausting, but we were grateful for what we could get done with his help.

This last season was very special for me because we also had the opportunity to climb several nunataks to place GPS markers on their summits, so that when the drone flew, it could recognize the exact position of the markers. It was not easy to transport the markers to the top of the nunataks, but the wonderful view was worth the effort!

Did you encounter any difficulties while doing your fieldwork?

Did you get to learn more about other research projects at PEA during the 2019-2020 season? Do any of them complement MICROBIAN?

It was enriching to work with several groups of researchers at the station this past season. We got to know the BELAM research project, which is hunting for micrometeorites. The two research projects don’t complement each other scientifically speaking, but we found it very interesting to think about ways in which the two projects could create synergies in the future. Unfortunately, the scientists working on an aerosol project, with whom we might cooperate in the future, were present at the station before Christmas and so we never met in person at PEA.

During the COVID-19 pandemic, almost all of the world experienced some type of lockdown. How do you think it compares with working at an isolated research station in Antarctica?

In a way, the two experiences are comparable, but in other ways, they are different.

In Antarctica, we could still go outside, even for a short walk around the station. Also, we as scientists had to go into the field every day, so we never felt locked up. We also didn’t communicate with the outside world that much while in Antarctica. But as soon as we returned home to lockdown in Europe, the amount of online communication we were doing was almost overwhelming.

On the other hand, it was similar to lockdowns many people experienced due to COVID-19 as you are forced to share close quarters with the same people over a long period of time. You are not always able to have your own privacy in these kinds of situations.

However, people adapted their behavior to the unique situation. As you know that you need to be in close quarters with others for an extended period of time, you have to learn to be more patient with each other to make sure things go as smoothly as possible.

Part of the MICROBIAN team got the opportunity to participate in STEM (Science, Technology, Engineering and Mathematics) outreach sessions for students on Skype while at PEA. How was this experience for you?

The students prepared a lot of questions before every Skype session, so it was exciting to see such enthusiasm coming both from young children and secondary school students.

While I was at the Princess Elisabeth, I took part in a session with high school students together with Henri Robert, IPF’s Science Liaison Officer. I had never spoken to high-school students before about my research. I was a little nervous because I didn’t know if I’d be able to answer all of their questions. But it went smoothly. They were very curious about things such as daily life in Antarctica for researchers and the kind of research we were doing there. They also asked about our thoughts on climate change.

It was very important for us as scientists to be able to pursue outreach activities with young citizens of the future.

As an early career female scientist, do you often motivate young women to pursue careers in  STEM disciplines?

As I usually speak with very young children about my research, I don’t often talk about the gender imbalance in many scientific fields. But during one Skype session I had with high school students while at PEA, I raised the issue.

Last season 2018-19 during the MICROBIAN field campaign, I was the only woman at the station for several weeks. I try to encourage young women and tell them they are just as capable as their male peers. They just need to believe in themselves and keep doing good work.

A good solution would be to raise awareness about the issue not only to young women but also to young men. They too need to be aware of the noticeable underrepresentation of women in STEM disciplines.

What do you think about young people demonstrating about taking action on climate change?

I think young people are very conscious about climate change and are very motivated to create a better future for themselves and the planet. Their voice should be more listened from older generations.

Some months ago, I went to a conference where I exchanged with some high school teachers. They told me that when the students go to visit museums with the school, they often refuse to take gift bags prepared for them (even if they include reusable water bottles) because it encourages the creation of more waste. Most conference attendees throw away things they receive in a gift bagbut young students prefer to bring their own water bottle everywhere even if it means an heavier backpack. It was touching to see how the young generation is thinking more sustainably and it should really be taken as an example for older generation students & scientist peers.