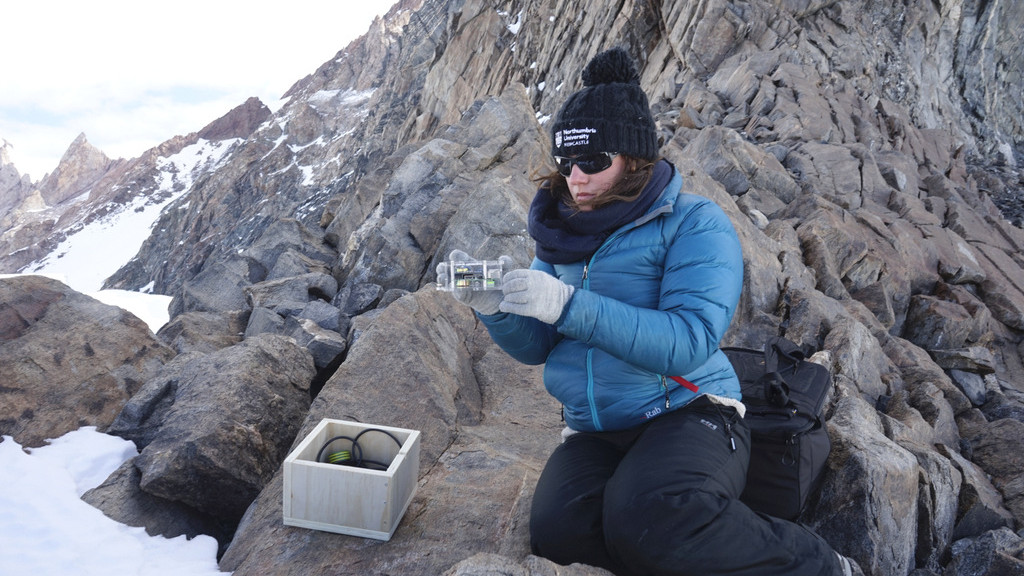 In a video released on Bloomberg's TicToc platform, Dr. Winter explains the research she's conducting for the BioFe project, and how it’s tied to better understanding the biological carbon pump in Antarctica.

The video shows her and her research assistant James Linighan collecting rock samples from nunataks (rocky outcrops) in East Antarctica in the vicinity of the Princess Elisabeth Antarctica (PEA) station during the 2018-2019 season in Antarctica. The purpose of taking rock samples is to to see if there is bioavailble iron in these samples.

As the ice sheet flows out towards the coast, the ice transports these sediments to the Southern Ocean, where the iron in them provides nutrients that feed primary producers such as phytoplankton (tiny creatures at the bottom of the food chain that live in the ocean). The more nutrients phytoplankton receive, the more they grow, and the more carbon dioxide (CO2) they take out of the atmosphere (taking carbon dioxide from the atmosphere is a necessary step in photosynthesis).

Origins of a climate scienst

In a multimedia news page put together by Andrew Paterson, a masters student at Newcastle University, Dr. Winter tells about how her natural curiosity as a child growing up in the Scottish town of Arbroath and experiences such as a trip to the Arctic when she was young shaped her ambition to become a polar scientist.

In addition to hosting a video with stunning footage of Dr. Winter in the field and an interview in which she raises the issue of preventing Antarctica from being affected by climate change, the news page also talks about Dr. Winter's research and what daily life is like in Antarctica. It also describes Dr. Winter's strong advocacy of promoting STEM (Science, Technology, Engineering and Mathematics) subjects to children and fostering their curiosity to explore the world they live in. During her season at the PEA station, she conducted experiments she co-designed with students back in the UK and helped them to interpret the results of the experiments.

Dr. Winter feels very privilidged to have been able to visit Antarctica. She hopes everyone will learn more about the planet's southernmost continent - even if it means just having a look on a map to get to know it better.