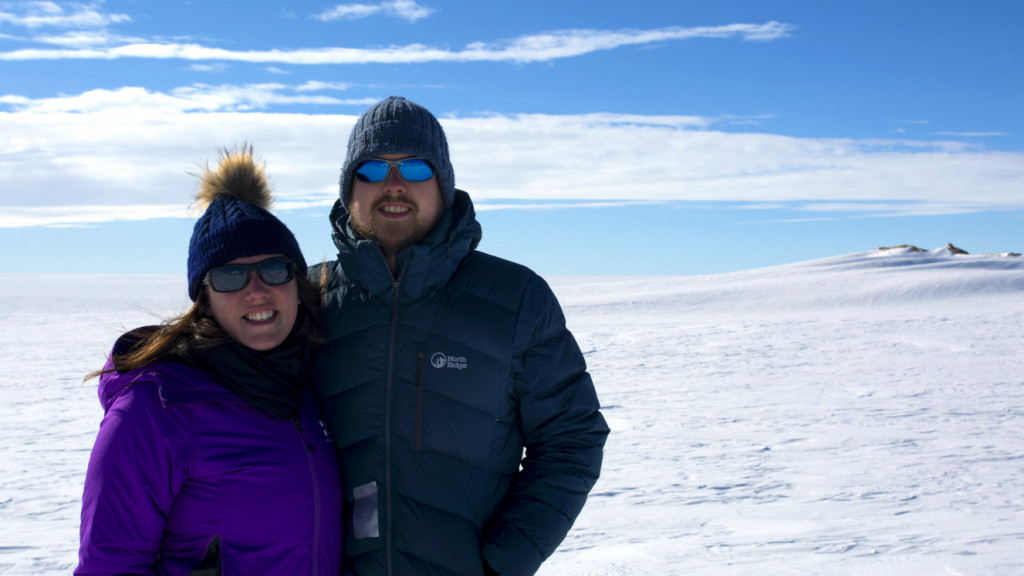 The BioFe project seeks to understand how biologically available iron is transported via glacial flow from the interior of Antarctica to the Southern Ocean, where the iron serves as a key nutrient to primary producers in the ocean food chain such as phytoplankton.

Since primary producers like phytoplankton take in carbon dioxide (CO2) from the atmosphere when they grow and multiply, the work she is doing in the BioFe project is essential for ultimately understanding how the iron nutrient cycle in Antarctica influences the rate at which primary producers absorb carbon dioxide, a key greenhouse gas driving climate change.

What did you do during the recently completed season in Antarctica compared with last season?

We started the season by scanning the mountains as we did last year. This allowed us to compare movements in the mountains that took place over the last year, such as falling rocks, simply by comparing visual images from last year to those taken this year.

While in the field, we noticed that some movement had happened – we could visually see new rock falls, but we will only be able to quantify change when we run computer-based analysis at Northumbria University.

This year we flew the drone, and we had a laser scanner with us to accurately record the surface of the mountains. The scanner could function well even in the cold of Antarctica.

What else did you manage to accomplish?

We also collected more sediment samples to test how much bioavailable iron was in them. I had already processed all the samples I took last year in the lab at the university but I wanted to get some extra samples from a couple of new locations.

This year we also took with us a new ice-penetrating radar system to look deeper in the ice than we did last year. Last year we wanted to look at sediments near the surface of the ice, so we scanned down to 200 metres. This year, we were able to scan down nearly 2,000 metres to look at sediments near the base of the ice. It was great! We did quite a few transects by pulling the radar system on a sled behind the snowmobile.

Where exactly did you take the samples? At the base of the rocky outcrops?

Yes! We took samples in the mountains. We took some from the base of the mountain where they accumulate and then some from the ice to see how they are being transported to the coast. We have some wind-blown samples as well because the wind picks up and transports very light sand-sized sediment particles. I collected them last year.

Did you also take radar transects like you did last season?

We were able to get useful data from the radar this season, and we were happy with the results. It was helpful to test out the new radar system.

Unfortunately, we couldn’t too many transects in the direction of the plateau this season because there were a lot of crevasses this year. But that’s Antarctic fieldwork!

What about the Raspberry Shake seismometers you put in place last year?

Last year we installed Raspberry Shake seismometers on a mountain not too far from the PEA Station. Unfortunately, during the last austral winter, the solar panel that was replenishing the battery of the seismometer was knocked down by the wind, possibly during a storm. However, we know that it was running quite well until mid-August, and I was able to get a lot of good data during the several months that it was running.

While I’m disappointed that I wasn’t able to get an entire year’s worth of data, we know that the solar panel was recharging the battery, and I am delighted that the system ran for as long as it did. However, now we know, if I were to do this kind of research again, I would need to either change the location of the solar panel (perhaps find a less windy place) or try to attach the solar panel to the surface more securely (although it was attached pretty strongly last year).

Were you happy with the work you did and the amount of data that you were able to collect?

We managed to get all three elements of the project completed and we collected lots of really great data. The weather was really good this season, which helped. It’s going to take us a couple of years before we can process all of the data we’ve collected, though.

But we have a long-term plan for this project. The work we did over the last two seasons is a great proof of concept. We plan to do something similar on a bigger scale over a larger part of Antarctica to compare what’s happening with bioavailable iron in different parts of the continent that have different geologies.

In this regard, I think the Ballet Latour Antarctica Fellowship was extremely helpful, as it allowed me to try out new techniques and collect some really interesting data. Thanks to the Fellowship, now we have something to build upon to upscale the project.

As far as you know, are you one of the first researchers who has ever looked specifically at the transport of bioavailable iron from the continent to the coast of Antarctica?

As far as I know, yes. Researchers interested in bioavailable iron for primary producers usually go to the coast of Antarctica or Greenland where they collect sediment from icebergs or deep ocean cores. But as far as I’m aware, there aren’t many well-established techniques looking at how this bioavailable iron gets to the mountains to the coast.

Why has this been the case?

You also took your husband, Ross, on your expedition this year. Was this the first time that you’ve taken him along?

We actually spent six weeks in a tent together in the European Alps a few years ago, collecting data for one of my other research projects, so we knew it could work. In the end, it worked really well because we are a great team, and he knows me and how I work.

He’s always been involved in my research, and he’s an engineer, so he’s good at solving problems. By the time we returned from Antarctica, he was already analysing some of the data that we’d collected!

Ross also helped some of the other scientists at the station when I didn’t need his help for some parts of the project. So he got to go to the polar plateau with the meteorology team. It was a wonderful, once-in-a-lifetime experience for him.

How did you find the technical support you received in the field and at the station?

We were supported this year by Jacques Richon, the station’s doctor, as well as Deputy Station Manager Henri Robert. Night Amin, the Station Manager, also came out on one of my field expeditions.

Roch, one of the carpenters, came with us to dismantle the seismic monitoring station we set up last year. It was great to have him again since he helped me to set up the station last year, so he already knew which tools we needed. However, this year I was much more independent in the rest of my work because I knew where everything was, and what I wanted to do.

I found that the station’s scientific programs were very well coordinated this year. Deputy Station Manager Henri Robert held science planning meetings before dinner every evening to coordinate all scientific activities and find synergies wherever possible. This allowed our team to go with the Japanese team on one of their expeditions since they were going to a place that we needed to go. They did their biological work while I took my sediment samples. It made a lot of sense, and you can learn a lot from the other research projects if you go out into the field together. I now know lots more about bacteria and algae!

It sounds like you've had a very successful season.

Yes, it was wonderful! I feel very at home in Antarctica, and I never want to leave! Since I’ve been back, I’ve had the opportunity to do more outreach. I visited school children to talk through experiment results, and they designed and tested wind turbine blades for the Princess Elisabeth Antarctica Station.

The article that I wrote for The Conversation just before my second field season has had more than 250,000 reads, So, that was incredible! It was really well received by the public. I’m pleased that it has allowed others to read about the work we do in Antarctica, and how wonderful the zero-emission credentials of the Princess Elisabeth Antarctica are.

In May, I plan to take part in the European Geophysical Union “Sharing Geoscience Online” event to present some of the results from the work that I’ve done at PEA. It will be a great opportunity to talk to other academics about what I’ve been doing.

Will we see you in October 2020 in Brussels for the next Baillet Latour Antarctica Fellowship Award Ceremony?

Yes. Although I teach in October, I’m sure I will be able to re-arrange my classes to attend the Ceremony.

I would love to come to Brussels to meet the new Laureate and find out about the next research project that will be pursued in Antarctica thanks to the Fellowship!