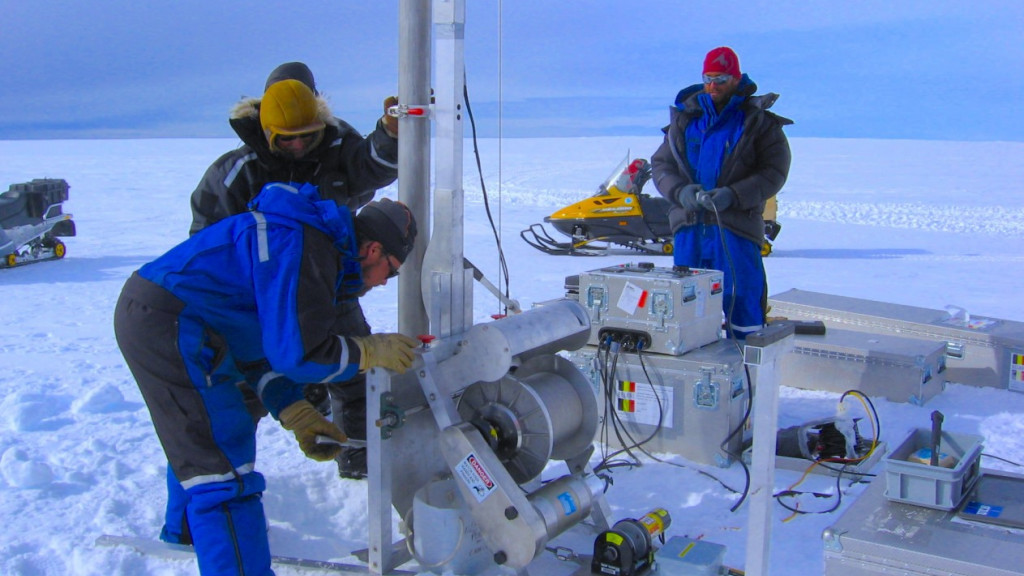 The Southern Hemisphere’s climate at high latitudes has changed dramatically over the last decades, but these changes and their global implications are not well known because existing short term records provide a limited picture. The Antarctic’s climate system itself is very complex with strong interactions between the continents ice sheet, atmosphere, ocean and sea ice. Within this system even small scale variations often have large scale consequences.

To make any progress in our understanding of the Antarctic’s influence on future sea level rise, it is crucial we link the dynamics that affect Antarctica at different spatial and temporal scales. Such knowledge is not only a high priority for the scientific community, but will also help inform policies which help us tackle and respond to the effects of climate change.

Dr. Jean-Louis Tison, from the University of Brussels, and a group of glaciologists from Belgium and Canada are now stationed at Princess Elisabeth to solve some of these riddles through the MASS2ANT project. This new project will examine the amount of snow falling each year in Antarctica, which is key to understanding the global implications of Antarctica’s influence on future sea level rise.

Two Canadian core experts are helping Tison and his team drill into a so-called "ice rise", a kind of ice hill about 500 m thick, that occurs along the coast near the station. Meteorological towers will also be set up on both sides of the ice hill on which they are working. Over the next three weeks, the team will crisscross the coast near the station to collect ice and snow samples.

Gathered snow samples will allow for reconstruction of the history of snow accumulation as well as the climate in Eastern Antarctica over the last two centuries. Tison and his team will also take a look at the internal structure of the ice they collect to see how snow is redistributed over Antarctica's surface.

MASS2ANT will give us an exciting glimpse into how man has influenced the evolution of the accumulation of snow through global warming.

Dr. Hugues Goosse is a Research Director at the Fonds National de la Recherche Scientifique and a Professor at the Université de Louvain (UCL) in Belgium. He is also Head of the Earth and Climate Division of the Earth and Life Institute and the Georges Lemaître Centre for Earth and Climate Research (TECLIM). The UCL-CLIM group has well respected expertise in climate modelling and they are actively engaged in studies of: (1) past climate change, (2) present state of the Earth system, (3) human-environment interactions and (4) modelling tools. Hugues recent work is mostly focused on sea-ice-ocean-atmosphere interactions in the Southern Ocean, decadal to centennial climate variations over the past millennium and data assimilations using ensemble methods in climate models.

Dr. Jean-Louis Tison is the Co-Director of the Laboratoire de Glaciologie at the Université Libre de Bruxelles and the Head of the PROPICE (Properties of Ice) Unit within that laboratory. For more than 35 years, the PROPICE Unit has built its expertise in field sampling and multi-parametric analyses of natural and artificial ice samples. Specialized in the analyses of ice at interfaces, this unit is fully equipped for the preparation and treatment of “sensitive” samples such as basal ice from ice sheets, sea ice, marine ice and lake ice. Jean-Louis has participated in 19 Antarctic, 6 Arctic and 16 Alpine expeditions and has contributed to several major publications on the unique paleoclimatic records of deep ice cores from the Antarctic and Greenland Ice Sheets (GRIP, North-GRIP, NEEM, Vostok, EPICA Dome C).

Dr. Stéphane Vannitsem is Head of Unit at the Dynamical Meteorology and Climatology of the Meteorological and Climatological Research Service of the Royal Meteorological Institute of Belgium. His main research activities are oriented towards applying techniques in nonlinear dynamics and stochastic processes for the study of atmospheric and climate related challenges with particular emphasis on variability and predictability. Characteristic contributions include the development of techniques for post-processing weather, hydrological and climate forecasts and projections, and the development of coupled ocean-atmosphere models and their use to understand the development of the low-frequency variability within the atmosphere.

Dr. Jan Lenaerts is an Assistant Professor at the University of Colorado. He is an expert in ice sheets and climate, but has a specific interest in polar climates, snow-atmosphere and ice-ocean interactions on meso- to global scales. The main tools he uses in his research are climate models evaluated with remote sensing and in-situ climate observations. He received his PhD cum laude in Polar Meteorology at Utrecht University in February 2013. His PhD research focused on blowing snow processes in Greenland and Antarctica. Since then, Jan has steered his research on improving snow and ice sheet processes in a global climate model (CESM). He received a NWO Veni Grant and InBev-Baillet Latour Antarctic Fellowship (both in 2014) to perform fieldwork in East Antarctica, and the AGU Cryosphere Early Career Award in 2017. He has led field expeditions to Greenland (2012) and East Antarctica (2014).

Dr. Stef Lhermitte has been working as an Assistant Professor in the Department Geoscience and Remote Sensing at the Delft University of Technology since 2016. Stef is an expert in multi-source remote sensing and snow modeling, but has a specific interest in assessing land-atmosphere interactions. He received his PhD at KULeuven in 2008 and subsequently worked at CEAZA (Chile), the Royal Netherlands Meteorological Institute (KNMI). In 2013, Stef received the prestigious FWO post-doctoral fellowship. During this period he studied the importance of atmosphere-snow interactions in polar regions. He coordinated and participated in the 2016 Benemelt field campaign beginning from the Princess Elizabeth station in East-Antarctica.

Hear what Dr. Tilson has to say about the project