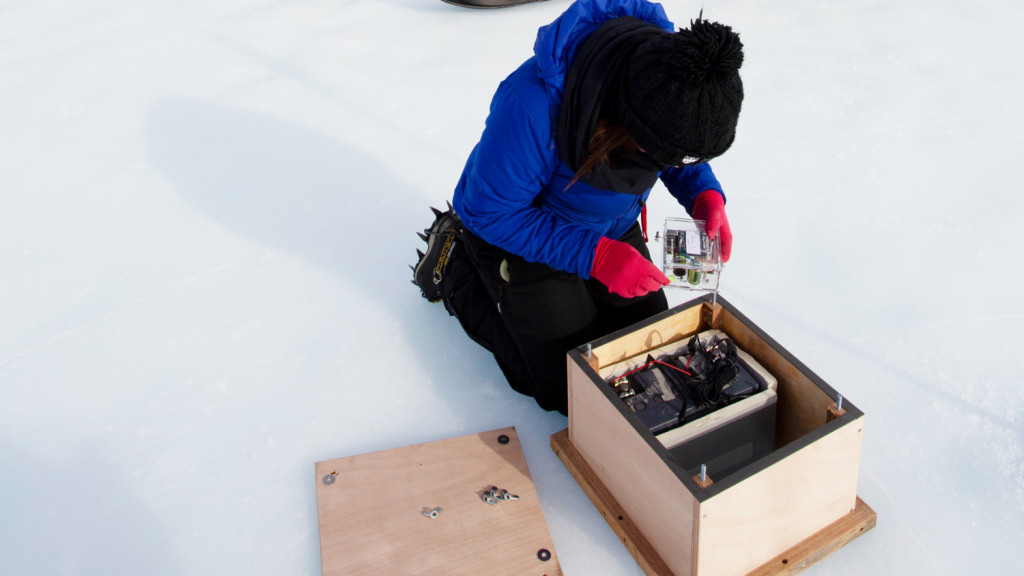 While in Antarctica to complete the second of two seasons of her BioFe reach project in January 2020, with help from the technicians at the Princess Elisabeth Antarctica (PEA) research station, Dr. Winter installed several Raspberry Shake 3D seismographs on a wind-scoured blue ice area close to the station in order to explore local seismic activity in the area.

The ice sheet covering Antarctica is constantly flowing towards the coast in all directions outwards from the highest points in the interior of the continent due to gravity. The ice frequently undergoes stress as it expands, contracts, and flows, which often creates small yet measurable icequakes.

During a ten-day monitoring period, the seismographs detected thousands of icequakes.  One even detected  2,936 icequake events.

The paper, entitled “Monitoring Icequakes in East Antarctica with the Raspberry Shake”, was published in April in the journal Seismological Research Letters.

Raspberry Shake manufactures seismographs that are easy to set up and deploy even in extreme environments so that scientists and even non-scientists who are interested in citizen science can collect seismographic data wherever they are in the world. All data collected worldwide is uploaded to the global Raspberry Shake server. However, due to limited access to the Internet in Antarctica, Dr. Winter had to make a few modifications to the seismographs (which she managed to do thanks to her knowledge of the Python programming language) so that they could collect data without uploading them to the Raspberry Shake server, and instead be retrieved once the unit had been removed from its location at the end of her most recent trip to Antarctica.

Dr. Winter and her colleagues validated the data they collected by comparing them to the data taken from a broadband station close to the Princess Elisabeth Antarctica, where data broadly matched what the seismographs collected.

By comparing their data with local air temperature measurements from the Landsat8 satellite, the research team determined that fluctuations in temperature over the course of the day due to varying levels of solar radiation are the main reason that the ice contracts and generates seismic activity in the blue ice fields.

“Our short-term seismic investigations provide us with valuable information on the thermal state of the ice and ice fracture mechanics in blue ice areas (which are often difficult to obtain by other means),” Dr. Winter explained.

The study demonstrates Raspberry Shake’s general main purpose of providing inexpensive seismographs that can allow anyone, whether scientist or non-scientist, to collect seismic data from anywhere in the world. As seismographs are small, lightweight, and easy to transport, scientists can easily take some on missions and non-scientists can place them at home or at work to gather data.

While there are many Raspberry Shake seismographs in more populated areas of the world, there aren’t too many in the Polar Regions at the moment. But Dr. Winter hopes that their most research paper will help convince scientists to take a few low-cost seismic sensors on missions in the future to help collect cost-effective data on seismic activity and fill in some gaps around the world.

“I will certainly pop a Raspberry Shake or two in my kit bag the next time I travel to the Arctic or Antarctic,” she said. “As they are so small and lightweight, I won’t have to take out too much of my emergency chocolate to fit them in!”