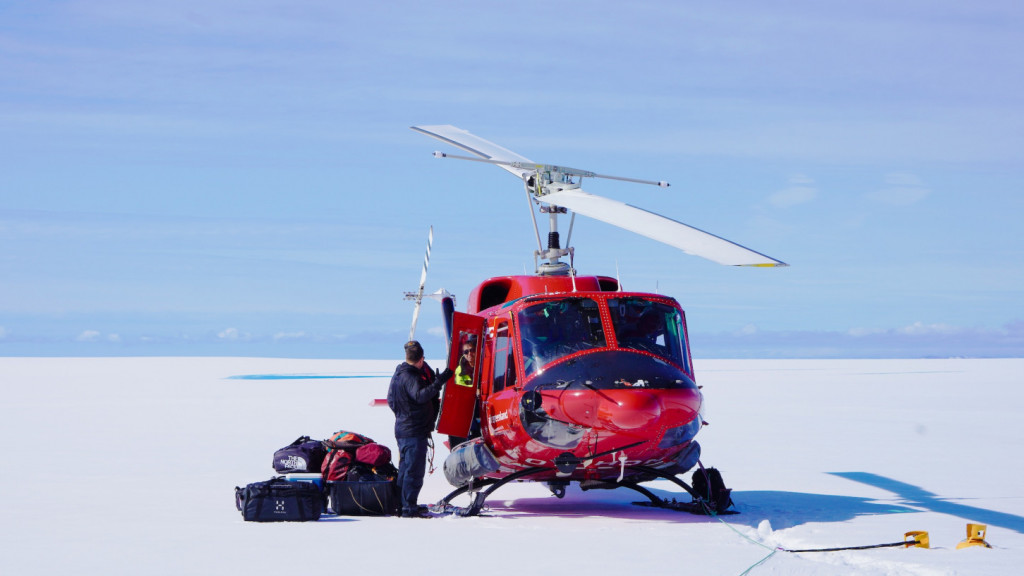 Konrad Steffen (Koni), former Director of the WSL, as well as the Cooperative Institute for Research in Environmental Sciences (CIRES) at the University of Colorado Boulder and the scientific Director of the Swiss Polar Institute, was one of the world’s leading glaciologists and a leading authority on the Greenland Ice Sheet. Simon and Derek had accompanied him on his last fateful mission to Swiss Camp in August 2020, and it was with great emotion that the team found itself in Ilulissat again, preparing to head out there. They were to be witnesses to the end of an era.

Evidence that the summer melt on the ice sheet was accelerating had been growing in recent years, and Koni was tireless in sharing this message. He had spent just over 30 years studying the changes happening to the Greenland Ice Sheet, and in particular to the Jakobshaven Glacier ablation zone. In fact, Swiss Camp sat close to this point so critical for the assessment of the changes in the flow of the glacier, which emerges in a bay to the south of Ilulissat, about 80 kilometres away.

In 2019, to celebrate the 30th anniversary of Swiss Camp, Koni had welcomed a group of VIPs at the camp in order to show them firsthand what was happening to the ice sheet, so that they would appreciate the potential impacts of Greenland's melt on the rise in sea levels across the world’s oceans. Koni was tireless in his attempts to drum the message home to politicians, to the public, and to other researchers that there was cause for serious concern.

In the summer of 2019, the situation became critical at Swiss Camp, as the melt began to affect the foundations of the platform under the camp, leaving it very exposed to the katabatic winds that form at the summit of the Greenland Ice Sheet.

Alain and Nighat first went to Swiss Camp at the invitation of Koni in 2011 and found themselves unexpectedly extending their stay as the Eyjafjallajökull Volcano erupted in nearby Iceland, grounding all air traffic for several days as the ash cloud settled. In 2012, Swiss Camp was suffering from the movement in the ice sheet, and Koni invited the pair back to help rebuild a completely new platform, which was installed at ground level.

By the following year, the platform was again two metres up in the air. The ice had receded from below, and the foundations had to be reinforced. Snow accumulation and melt cycles continued over the following years, but miraculously the camp held, until 2019. That summer, it became increasingly obvious that the area was in transition, as new crevasses opened up around the platform, and even close to the tents. It was fast becoming obvious that the site was no longer safe for operations.

In late July 2020, as Koni arrived in Ilulissat ready to fly in to the camp to assess the conditions, he received satellite images that showed that the platform had collapsed. He was accompanied that year by Simon, Derek and Jason Box, (a foremr student of Koni's who later joined the Denmark Geological Survey (GEUS), which took over the maintenance of the automatic weather stations (AWS) that Koni had installed).

This was to be Koni’s last research mission to Greenland. On the 8th of August 2020, he disappeared when we went out onto the ice. The search and rescue teams that flew in later that day deduced that he had fallen into one of the larger crevasses in the area.

Returning to Swiss Camp in July 2021 was not straightforward. The summer of 2021 had proved to be a summer of meteorological records: the hottest, wettest, strangest summer of plagues of Biblical dimensions. Fires burned along the West Coast of the US and parts of Siberia. Heatwaves were followed by torrential rains, causing catastrophic flooding in parts of Europe.

Greenland was not spared the fluctuations in weather, as unsettled weather systems unfurled over the Davis Strait from Canada, one succeeding another. The first attempt to reach the camp had to be aborted as thick fog blanketed the ice sheet. The next attempt took place on the 25th of July Flying in, the team was able to see the full extent of the summer melt, with ubiquitous surface melt ponds like pure blue lakes dotting the ice sheet. Rivers flowed on the surface of the ice. Barely any snow was visible, that is until Swiss Camp was reached.

Once there, the team had to rope up in order to assess the area. A safe zone was staked out in a ring around what remained of the platform and the facilities that had been there. The mess tent had virtually disappeared into the snow. The workshop tent was still intact, but half full of snow. This snow blanketed the structures that poked out where the support posts had been. It looked like a shipwreck.

One ten-metre weather station tower had collapsed, and the other AWS sat on the far side of a crevasse. Koni’s tent, which Simon had left up for him, was buried up to the very tip, of which only a few centimetres were still visible.

Once camp was set up and the dome mess tent was operational, our task was to recover all the equipment, snow mobiles, and supplies that could be salvaged and to return them to Ilulissat (where Kathy and Steve Young, previously of Polar Field Services, supporting the US National Science Foundation (NSF) operations in Greenland (of which Swiss Camp was a part initially), would manage their recovery, recycling or disposal).

The cleanup was not a simple task. Once the platform had been disassembled and the wood piled up, the remainder of the equipment and snowmobiles were under thick snow. Much of the snow is what is referred to as “sugar snow” resembling granulated sugar. This substance is not very compact and very slippery; it gives virtually no traction for pulling.

The surroundings of the safe zone were completely bare, in contrast to Swiss Camp, which was blanketed. A few days of digging uncovered a thick layer of solid ice about a metre and a half down, which had encased the snow mobile runners. But this ice layer lay under about thirty to forty centimetres of water.  No amount of bailing could lower the level of the water. One snowmobile was dragged out with slings, but a second, which looked promising, was held fast by one ski and no amount of pushing or pulling could dislodge it. Finally, that ski had to be removed with a disc cutter. The two snowmobiles were flown back to Ilulissat on the last day by helicopter, dangling underneath it like two yellow ducks.

When the Bell 212 helicopter flew in to Swiss Camp on the 27th of July, the pilots brought us the news that the temperature in Ilulissat was a sizzling 18°C! But that was not all. In Kangerlussuaq, the temperature had soared to 27°C! This had never been experienced before in Greenland. The Danish researchers later estimated that the melt on the 27th of July from the Greenland Ice Sheet produced enough water to cover the entire State of Florida in 5 cm of water.

This news was not encouraging. Alain and Derek roped up to carry out the maintenance of the AWS, and Alain surveyed a path from the safe zone to the weather station so that Derek could go and recover the memory card from the other side of the crevasse.

The two also dismembered the ten-metre tower and packed whichever instruments and sensors were still intact to send them to Ilulissat, and from there to Zürich. The intention was to try and assemble a new AWS for Antarctica from whatever could be salvaged.

A Viking ritual in the lit pyre of wood from the platform served as our memorial service for Koni.  We spent the last night in quiet contemplation. The place held many memories for all present.

On the morning of the 29th of July, two helicopters flew in to evacuate the camp and the salvaged equipment. On the flight back to the coast, a further stop was planned to service a GPS station at the Jakobshaven ablation zone. But we learned that the apparatus had been all but swallowed up by thick ice, and the attempt was abandoned.

It was during the flight back to the coast along the glaciers that it became apparent that the level of melt on the ice sheet was exceptional. Swiss Camp was like a speck of snow surrounded by bare ice sheet stretching hundreds of kilometres in all directions. In places, the surface of the ice sheet was so dark that it accelerated the melt. In others, we saw the rosy tint of pink snow, which harboured algae, which also accelerated melt.

The glacier front itself was now on land and no longer in the fjord.

It is now clear that recent warming has transformed the ice sheet into a much more dangerous and unpredictable place to conduct research than a few decades ago. But as we left to return to Brussels, Derek was about to join Danish researchers who were going to service the remaining weather stations during the month of August.

On the 9th of August, a year after the disappearance of Koni, the IPCC published their Sixth Assessment Report on the science supporting projections of climate change and its impacts to a frenzied reception, as storms, and fires, continued unabated. It sounded like a foghorn warning of the dangers ahead.