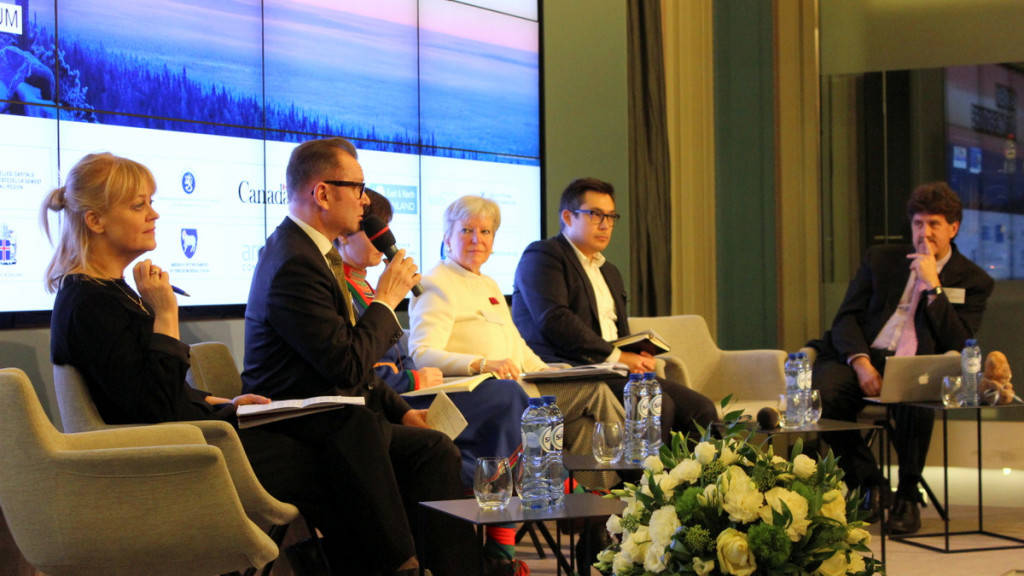 The all-day event, organised annually by the International Polar Foundation in conjunction with a large network of Arctic stakeholders, serves as a public venue to discuss key Arctic issues in Brussels.

After a brief welcome from Member of the Belgian Polar Secretariat Piet Steel, the symposium began with opening keynote speeches from the EU’s Ambassador at Large for the Arctic Marie-Anne Coninsx, the Sámi Council’s EU Coordinator Elle Merete Omma, and several other prominent Arctic figures.

In the afternoon, following a delicious lunch of fish sponsored by Iceland Responsible Fisheries, a panel led by Senior Adviser for Northern Policies at Finland’s Ministry for Foreign Affairs, Harri Mäki-Reinikka, looked at current and proposed Arctic transport projects in the context of climate change and sustainable development, both within the Arctic and from the Arctic to the rest of the world.

This was followed by a session moderated by Arctic Economic Council Director Anu Fredrikson, which explored barriers entrepreneurs encounter, ways to overcome them, how to create an entrepreneurial culture, and how to facilitate culture as a business in the Arctic. Of particular interest to conference-goers were representatives who could speak about indigenous culture as a source of entrepreneurial activity in the Arctic, including Anne Lajla Utsi CEO of the International Sámi Film Institute, and Sandra Márjá West, Director of the annual Riddu Riđđu Festival in northern Norway.

The final session of the day, led by Andreas Østhagen, also from the Arctic Institute and Nord University, discussed the challenges we face when exploring the blue economy’s potential, not only in the Arctic, but also more generally, and how to go about governing blue economy activities. Following a raffle drawn by speaker Hayley Henning from Greenland Ruby A/S and Ambassador Marie-Anne Coninsx in which a free Greenland Ruby broach was given away,  the symposium closed with remarks from the City of Tromsø’s Arctic Ambassador, Kirsti Methi, and Deputy Secretary General for Economic and Global Issues at the European External Action Service, Christian Leffler.

Bringing the Arctic to Brussels

The International Polar Foundation would like to thank its sponsors, the Brussels Capital Region and the Pink Polar Bear Foundation, for helping to support the symposium.

We would also like to give thanks to the symposium’s network of partners, which includes the many Nordic regional offices and embassies of many Arctic states in Brussels. As representatives of the Arctic in Brussels, they play a major role in forming the symposium’s programme each year.

A report highlighting salient points discussed during the symposium will be published in the coming weeks. Keep an eye on the Arctic Futures Symposium website for updates!

Media: © © Kaj Joensen, Mission of the Faroes to the EU