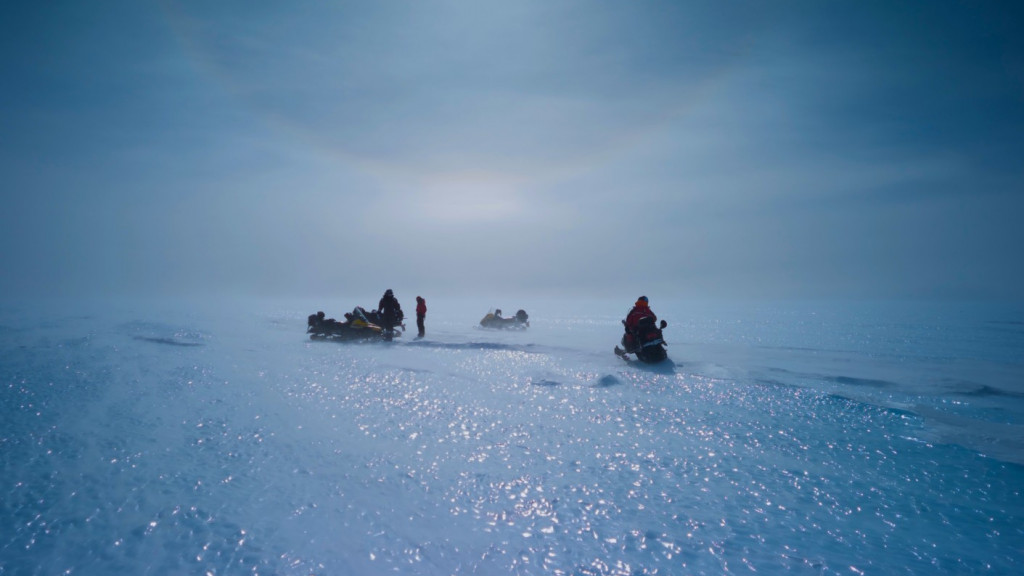 Tiny particles like dust which become airborne and trapped in the atmosphere interact with each other through scattering and absorption with the sun’s radiation. These particles play a crucial role in the formation of clouds because they affect both the radiative properties of clouds and precipitation like rain and snow.

Although Antarctica is considered one of the most pristine places on Earth when it comes to anthropogenic emissions, these miniscule particles can trap and bind pollutants and carry them over great distances. This means the Antarctic may not be as pristine as we once believed.

This is one of the reasons Dr. Christophe Walgraeve, Dr. Nadine Mattielli and Dr. Alexander Mangold have just collected samples near Princess Elisabeth Antarctica research station. They will compare dust which arrives on the coast to that which travels towards the center of Antarctica, closer to the plateau.

They will try to discover which types and what are the sources of the dust that arrives in eastern Antarctica. But equally, they would like to find out more about the atmospheric transport pathways that occur between the atmosphere and snow, and possibly in the nearby Southern Ocean.

Such knowledge will give us important insight concerning biogeochemical cycles and the relative importance of natural and anthropogenic compounds found in Antarctica. This will also improve our understanding of climate data extracted from ice cores and the transport and deposition processes of not only mineral nutrients, but also organic micro-pollutants in polar regions.

This type of work has never been done in Dronning Maud Land, East Antarctica, where Princess Elisabeth station is found, so we are looking forward to finding out what new science the CHASE team uncovers.

Dr. Christophe Walgraeve is a Belgian scientist. He did his PhD research at the University of Ghent with the EnVOC research group under the PARHEALTH project (supported by the federal government). Christophe’s research focuses on the detection and quantification of atmospheric organic micro pollutants, particularly volatile organic compounds (VOCs) and semi-volatile organics sorbed onto particulate matter. He uses advanced sampling (through active and passive sampling methodologies) and analytical methods requiring the use of various techniques like gas chromatography (GC) hyphenated to high resolution mass spectrometry (HRMS) and high resolution proton transfer reaction mass spectrometry (PTR-Qi-TOFMS).

Dr. Nadine Mattielli is a geologist and geochemist. She is currently a full Professor at the Université Libre de Bruxelles and Head of the Geology teaching program in the Faculty of Sciences and Secretary of the Master Jury. She is co-director of the Laboratoire G-Time (Geochemistry - Isotope, Mineral and Element Tracing), from the DGES (Department of Geosciences, Environment and Society) and PI or co-PI of several research programs (Belspo, FNRS, ARC, PAI, EU) and the BIGE analytical platform, a joint venture between AMGC (VUB) and G-Time (ULB). Nadine’s main field of expertise is isotope geochemistry (radiogenic and heavy stable isotopes), in particular, the sources and clouding processes which affect airborne particles collected in Antarctica.

Dr. Alexander Mangold has been working with the Observations Department at the Royal Meteorological Institute of Belgium since 2005. He manages the institute’s research on aerosols, UV and ozone at the Princess Elisabeth Antarctica research station. So far, Alexander has participated in six expeditions to the station where he not only built an observatory to monitor aerosol, ozone and UV, but also carries out radio soundings using weather balloons. During the 2017-2018 scientific expedition to Princess Elisabeth, he will focus most of his time conducting project AEROCLOUD but will also be busy with the CHASE project, in partnership with the University of Ghent and Université Libre de Bruxelles.