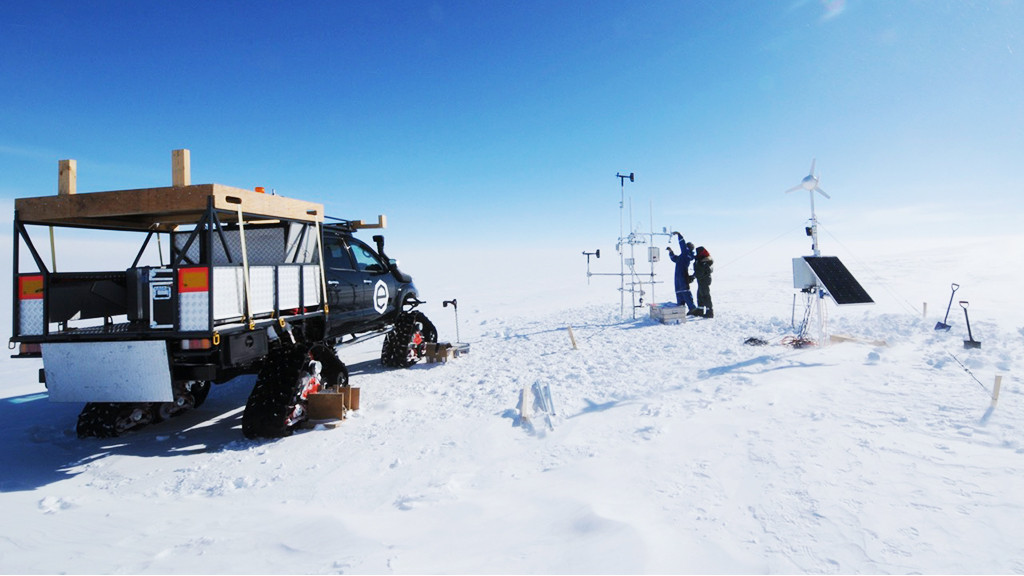 Which projects have Swiss scientists been involved with at the Princess Elisabeth Antarctica station?

Teams of Swiss scientists have been at the PEA Station every year since the 2016-2017 season. The projects we have been working on evolve in scope every year a little bit based on previous results and findings. We hope to establish a continuous long-term time series of observations related to snow transport and surface mass balance in Antarctica.

So far, we have conducted research at PEA in the context of two projects: "From Clouds to Ground: Snow Deposition in Extreme Environment" and the “Local Surface Mass and Energy budget in Antarctica” (LOSUMEA). Both projects are trying to clarify the relationship between precipitation, snow transport (in the form of drifting and blowing snow), snow deposition and ultimately firn and ice formation.

Last year, we also saw the start of the “Princess Elisabeth Orographic Precipitation Experiment” (POPE) project, run by our colleagues from the Environmental Remote Sensing laboratory at EPFL. This project aims to collect reference observations on the dynamics of precipitation formation, snowfall and interactions with complex terrain in Antarctica using a suite of terrestrial in-situ remote sensing instrumentation.

What are the objectives of the “From Clouds to Ground” project?

The goal of this project is to understand the evolution of the surface mass balance in this region of Antarctica within the context of climate change. However, to reach this objective, several years of observations are required to detect trends and signals in the inter-annual variability. Going to Antarctica once to collect data is interesting, but such measurements are only a snapshot; it is not possible to see an increase in accumulation or sublimation over time with just one visit.

We know there has been a lot of melt and ice loss at the periphery of the Antarctic ice sheet, and a number of ice shelves have collapsed. Therefore, it is important to measure what happens in the interior of the continent, including the study of atmospheric circulation processes, precipitation and accumulation or erosion of snow (ice mass); this will give us a more holistic picture.

Warming of the atmosphere over Antarctica could lead to increased moisture transport from the coast towards the interior of the continent, resulting in a possible increase in precipitation. The challenge is to understand and quantify the continental scale mass balance of current and future precipitation and ablation processes in Antarctica. The scientific community will need decades of observations to b able to answer this question.

Data from our projects will also be used in larger-scale atmospheric circulation models. We use local measurements around the PEA Station and upscale these observations to larger areas representative of this part of the continent. This may contribute to climate projections produced by global atmospheric climate models.

In what ways does the project “From Clouds to Ground” differ from previous studies looking at surface mass balance in Antarctica?

It is the unique suite of instruments in place and the combination of measurement techniques that makes this project different. This includes snow particle counters, turbulent sensible and latent heat flux measurements, radiometers, standard meteorological sensors, automatic cameras, terrestrial laser scanning and snow property measurements using a snow micro-penetrometer. During the 2019-2020 season, we started using a drone for aerial photogrammetry (3-D scans of the surface). This data will help us understand processes related to snow transport and characterise the surface roughness. For example, we used the drone to survey the surface topography of specific areas near PEA before and after a storm to determine how surface characteristics of the snow change during a storm.

During future visits, we would like to repeat the drone flights over the exact same areas to determine the evolution from year to year. We are interested in detecting overall snow accumulation or erosion in the area. Images are geo-referenced using differential GPS measurements.

The novelty of this project is the combination of local-scale processes, heat fluxes, surface topography, the latter impacting turbulent heat fluxes (i.e. convection of heat and moisture),  sublimation and snow erosion and deposition. While this project aims at quantifying the local mass balance it is also geared for at understanding the physical process and involved dynamics in detail.

During the 2019-2020 season, you added radiometers to your arsenal of instruments, and you moved several of them. What was the purpose of doing this?

Radiometers allow us to determine additional components of the surface energy balance, namely solar radiation. The combination of the energy and mass balance provides a more coherent view of the involved physical processes. We already measured other components of the energy balance such as sensible and latent heat fluxes. Currently, we have no infrared radiation sensors installed, but this is something we plan to do in the future.

Additionally, as a result of continued snow accumulation, we have to lift the sensors every year or even rebuild the entire setup of our measurement stations. Otherwise, the sensors will eventually get buried.

How are the LOSUMEA and POPE projects complementary to one another?

While the POPE project focuses on clouds, atmosphere and precipitation in Antarctica, our measurements in the LOSUMEA project concentrate on near-surface transport processes such as snow drift and snow accumulation.

Our principal goal in the LOSUMEA project is to understand the local mass balance of the East Antarctic Ice Sheet in the vicinity of the PEA station. For this purpose, we need the data of POPE as an important input.

Surface mass balance of an ice sheet is calculated by looking at the inputs, i.e. precipitation in the form of snow and deposition of drifting snow, minus the output, e.g. sublimation, advection in the form of snowdrift, and eventually ice flow to the coast where mass is lost by iceberg calving and/or melting.

It is not easy to quantify the surface mass balance for several reasons: precipitation in Antarctica is very limited (climatologically, Antarctica is a desert) and most mass balance components (e.g. snow drift, sublimation) are generally difficult to measure, especially in these extreme conditions.

It is also difficult for instruments on the ground to distinguish between blowing snow and actual precipitation. This is one reason why we closely collaborate with the POPE project. Thanks to their measurements (Radar and Lidar), we have estimates of the amount of actual precipitation.

As there is no ice melting in this part of East Antarctica, sublimation (phase transition from solid to gas/vapour) and snow transport are the principal components of the surface mass balance in this region. Drifting snow and a very dry atmosphere create the perfect conditions for sublimation to happen. To quantify these two components, we measure them using snow particle counters and gas analysers to obtain vapour fluxes, which can be converted into sublimation.

What was missing in previous years were accurate measurements of precipitation. We only had local and unreliable data from the ground. This is where the POPE data turns out to be extremely useful for better understanding surface mass balance in the region.

Why did you choose Princess Elisabeth Antarctica as an observation site of the research project?

Our research at PEA is part of research efforts happening at several places across Antarctica: the Japanese Showa station, the Australian Davis station and the Belgian Princess Elisabeth Antarctica. We hope that measurements from these sites will allow us to obtain a larger picture related to surface mass balance and snow deposition in Antarctica.

PEA is located about 200 km from the coast at a unique location. To the north of the station is a plateau, with a rather homogenous surface gradually descending towards the coast. To the south, there are the Sør Rondane Mountains, which interact with the katabatic winds originating from the continent’s interior and the typical easterly wind influencing snow deposition in this region. This geographical diversity of conditions is ideal to study a variety of processes that can otherwise not be observed at many other sites in more homogeneous terrain. In this respect, it is a unique location.

Additionally, our laboratory has had a very good relationship with Alain Hubert and IPF for a long time, and the logistical support at PEA is excellent.

Why do you believe it is important to study extreme environments in the quest to better understand the effects of climate change?

A lot of our extreme environments include the cryosphere, which comprises not only ice-covered areas in the Arctic and Antarctic but also mountain glaciers around the world. These environments are very sensitive to climate change, and the changes happening there are very pronounced. They play a major role in regulating the planet’s climate.

However, it is often very difficult to access many parts of the cryosphere to collect in-situ data. As a consequence, the data we do have today is rather sparse and insufficient considering the importance that these regions play in regulating the global climate. This is particularly true for high altitude and high latitude regions. This is why studying extreme environments and especially the cryosphere is so important.

Have you personally observed any significant changes in the parts of the cryosphere that you have visited?

In the Alps, the changes have been very pronounced. I spent a lot of time in the Alps as a child, so I have a few decades of personal observations for comparison. Looking at my personal photographs, I see that the glaciers have retreated drastically, the snow line is higher, and the quantity of the snow in the Alps has decreased and the snow season is shorter. Many ski resorts at low altitudes are at the limit and even higher altitude resorts only survive thanks to artificial snow production.

As for Antarctica, I’ve spent two seasons at PEA myself while our team has spent four seasons there, so we have not been there long enough to observe a significant trend. However, I was surprised of how warm the 2019-2020 season was. But again, one season is not long enough to infer a trend.

What are your plans for the future? Is your team planning on returning to Antarctica?

We actually plan to return to PEA a few more times over the next seasons to collect more data and extend the time series. Fortunately, one of my colleagues at EPFL received a grant from the Swiss Polar Institute that allows him to go to PEA during the 2020-2021 season. While I am very happy for him, I am sad at the same time I cannot go myself.

I had a great time at PEA during the seasons I spent there. The team is amazing, and the work environment is very productive. My scientific colleagues and the IPF staff became friends from the very first day. It was an exceptional experience to be there and I am very grateful for these opportunities.

As usual, the first task is maintenance after the unattended winter period. There is always a lot to do. We plan to install a more robust power supply system that will allow the instruments to function throughout the austral winter without data gaps, which happened in previous years. He will also replace some of the sensors on the stations to improve measurement precision and of course, he will repeat drone flights over our survey areas.