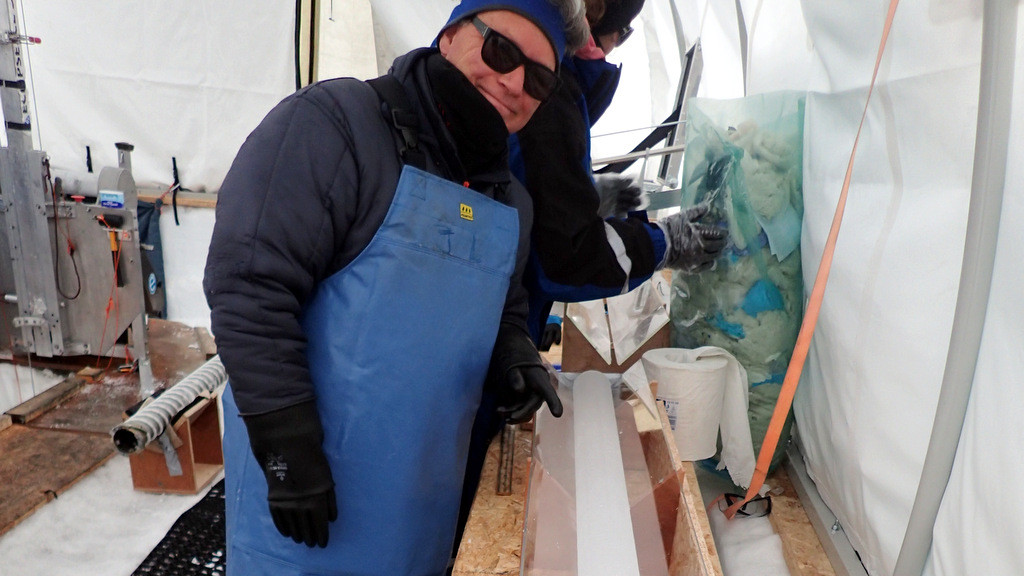 What are the objectives of the Mass2Ant project?

In the Mass2Ant project, which stands for “East Antarctic surface mass balance in the Anthropocene: observations and multiscale modelling”, we’re trying to get a better understanding of the mass balance of the Antarctic Ice Sheet over time in the region of the Princess Ragnhild Coast in East Antarctica, since the beginning of the Antropocene (the time in Earth’s geological history during which humans have started to have a significant impact on the planet’s climate system).

We hope to document surface accumulation during the last four or five centuries by examining medium-depth ice cores taken from ice rises in the Princess Ragnhild Coast area. We hope to use these data to validate results from regional high-resolution atmospheric models and large scale global climate models.

What is mass balance and how is it linked to sea level rise?

The mass balance of an ice sheet, like the ones covering Antarctica and Greenland, is the balance between the amount of ice added to the ice sheet in the form of snowfall and the amount of ice taken away from the ice sheet through iceberg calving, ice melting (ice surface coming in contact with the atmosphere or the bottom of the ice coming in contact with the ocean), and ice sublimation (ice turning directly to water vapour).

When ice is added to the Antarctica Ice Sheet, it contributes to a net fall in average global sea level, as snowfall that falls on Antarctica comes from water that evaporates from the ocean to form clouds, and is deposited on the ice sheet as snow. Over time, the snow hardens and becomes the ice of the ice sheet, and is covered by more and more layers of snow over time. Ice taken away from the ice sheet contributes to a net increase in average global sea level, as ice that flows off of the ice sheet is added to the water in the oceans.

Ice loss from the Antarctic is increasingly better documented, especially in West Antarctica, as a recent NASA study shows. Paradoxically, surface mass balance is less well known, especially in East Antarctica, where the Princess Elisabeth Station is located. An important issue is how snow deposition and redistribution varies over time and in different locations.

What was your mission in Antarctica during the 2018-2019 season?

Field activity during the 2018-2019 BELARE season focused on the recovery of a third ice core from ice rises at the Princess Ragnhild Coast, about 200 km from the Princess Elisabeth Station.

Ice rises are mounds of ice located above local bedrock elevations on the sea floor, which makes the ice stick up in these areas as it flows towards to ocean on an ice shelf. Ice rises have the peculiarity to develop their own simple ice flow, as the ice flows radially from the summit to the sides, mostly independent of how the ice in the surrounding ice shelf flows. This makes them an ideal tool for reconstructing past climates.

During this past season, we were able to recover a 260 metre-long ice core of excellent quality, which will give us more than four centuries of climate information of the area. We also took 360° videos of the walls of the borehole, its Global Navigation Satellite System (GNSS) position, radar images, snow properties, and meteorological measurements. All this information will be fed into models that describe local ice sheet dynamics and atmospheric processes.

We aim to reconstruct snow accumulation over the last four centuries, including changes in surface mass balance, to detect changes linked to global warming, and to compare it to the same data for the other two ice cores of 120 and 208 metres we took from different locations (other ice rises) along the coast during previous seasons, in order to look for any similarities or differences in past climate across the region.

What were some of the highlights and difficulties you encountered in the field ?

This year, the main challenge was to switch to “wet drilling” at depths below 90 metres.

Last year, the quality of the ice cores considerably degraded below 100 metres due to the large pressure difference between the drill hole at the surface (normal atmospheric pressure) and the surrounding ice (about 10 atmospheres at 100 metres). The pressure difference makes the ice very sensitive to the shocks of cutting, which resulted in a series of broken ice discs, making further analyses of the ice core extremely challenging.

The only solution was to fill the borehole with a drilling liquid that does not freeze and has a density close that of ice. From previous experiences with international deep drilling projects, the liquid to use is ESTISOL. It is the least problematic for the operators. The only issue is that it can dilate and eat up all rubber components (including shoes, gloves, etc.), and can irritate the skin and eyes.

More and more ESTISOL had to be added as we penetrated deeper and deeper in the ice rise. By the time we reached 260 metres, we had a 75 metre-high liquid column.

Switching to this new drilling method was totally new for us. We benefited from highly useful advice from our Canadian, Danish, and Australian colleagues, as well as the building skills of the IPF team. Still, many challenges were adequately solved, allowing us to work routinely until the end of our mission.

What were your living conditions in the field this season ?

Knowing how demanding these field expeditions are, IPF provided us with excellent logistical support and relative comfort, which makes all the difference! We cooked, ate, and worked in specially designed mobile container units. A solar-powered heating and hot water system, indoor toilets, and a small bathroom with a sink and shower really made life easier in the field, and outdoor scientific activity much more efficient.

We ate frozen meals cooked at the Princess Elisabeth Station, which considerably reduces the time invested in domestic tasks in the field, and also provides us with high quality, delicious and balanced nutrition.

We slept in individual tents, which are very comfortable, and surprisingly highly resistant to very strong winds. The tents were sometimes too warm in the morning and during the day with the constant sun streaming through the orange fabric, especially for the drilling team, who was working at “night” to keep the ice cores from melting.

We discussed the details of the mission with the IPF team several months in advance. IPF contributed at all levels, from making specific material for ice cores and handling drilling liquid in the drilling tent, to the return of the ice cores and cargo to our universities in Belgium. IPF also organised the training of the personnel at the Princess Elisabeth Station, supported the preparation of the field trip, and managed the convoy that transported the research team to and from the two working sites at the coast. We had continuous support from a field guide and mechanics during the whole field trip, and help from the base leader with setting up and dismantling the field camps.

A recent study published by NASA found that the Antarctic Ice Sheet is melting six times faster today compared to 40 years ago. Is there any link between this study and the expected findings of your research?

As explained earlier, the mass balance of Antarctica includes both the net input of snow at the surface and the loss of ice from iceberg calving and ice melt at both the surface and at the base of floating ice shelves.

The NASA study focuses on ice loss, while our work focuses on potential gains from surface accumulation of snow, and its trends over the past several centuries. These two approaches are complementary and need to be combined to reduce uncertainties about future sea level rise.

How can your research help to understand past climates and how can we use the findings of your research to mitigate and adapt to current climate change?

Current IPCC model projections for average global sea level rise by 2100 still show a large range of possibilities: from 0.2 metres to more than 1 metre. What the actual number will be will depend on actions we, as a society and as individuals, take to limit greenhouse gas emissions.

However, having a better understanding of the Antarctic Ice Sheet’s response to climate warming can help reduce the uncertainty in projections.

You can follow the Mass2Ant team’s adventures in Antarctica on their blog!