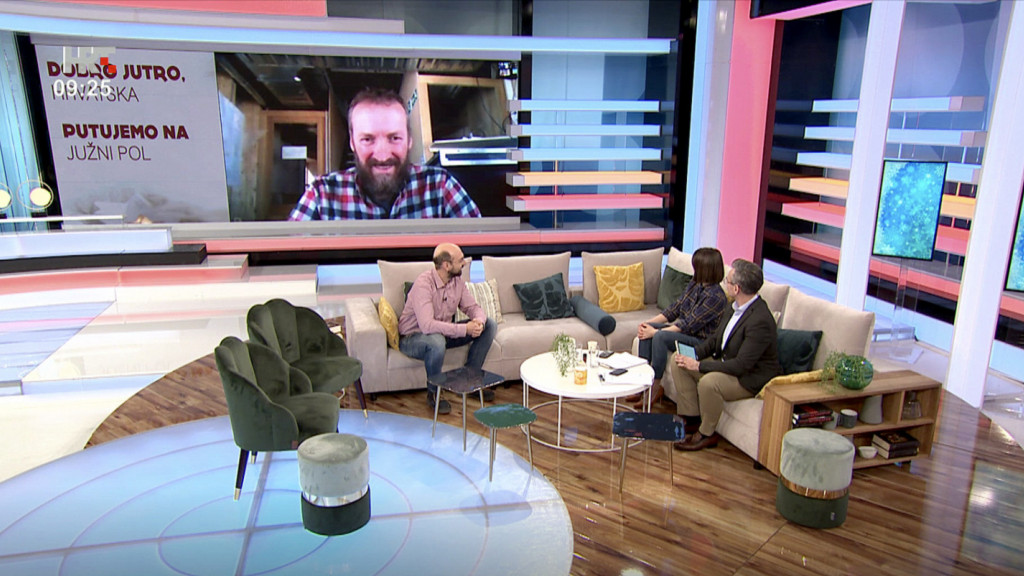 The first was native Croatian engineer Damir Simpović, who had been on a mission to the station earlier this year as part of the IT/technical system team. He was interviewed live in the TV studio in Zagreb. Joining him live via satellite video connection form the station itself was IPF Science Liaison Officer and Deputy Station Manager Henri Robert.

The studio audience was awestruck to learn more about the first zero-emission polar research station ever built, how it was able to function year round on renewable wind and solar energy, and how the station was used to welcome researchers during the austral summer research season from November until mid-February.

Damir explained to the studio audience about the very important job he is doing: managing a setup that can remotely control the Princess Elizabeth Antarctica throughout the year from anywhere in the world, thanks to a satellite link. He highlighted the importance of being able to have remote access to the station in order to maintain its systems, especially to monitor energy production and use (primarily from wind during the austral winter, as there is little or no sun for many months).

The expert engineer also stressed the importance of being able to retrieve scientific data being collected by instruments and sensors scientists have set up at the station throughout the year - especially when the station is unoccupied during the austral winter. It is vital for scientists to be able to have uninterrupted data sets for the various scientific research projects they are working on.

Live from the station - an engineering marvel!

Thanks to a live video connection with Princess Elisabeth Station, Henri Robert was able to talk to the audience and answer several questions from the speakers.

He explained the objective was to build a "zero emission" scientific research station that could run sustainably, meaning it would run entirely on renewable energy and create little to no carbon emissions.

"The idea is to show the world that such a station can be built in the harshest conditions, and that it can be efficient and viable with a high degree of comfort,” Henri explained. “If it can be done in Antarctica, then it can be done anywhere in the world, and we can all limit our negative contribution to climate change. The station has been running for a decade already and will continue to do so for many more to come.”

He also described how the Princess Elisabeth Antarctica was built using a passive design and powered by wind turbines as well as solar photovoltaic and solar thermal panels. Energy storage and use is managed thanks to a smart micro grid that allows the free use of energy when it is available, but restricts specific uses when power is running low, which can happen from time to time during calm and cloudy “nights”.

The show was broadcast live on Wednesday, January 29th at 9:00 am, Central European Time, on the Croatian television station HRT. You can find a video of the segment on HRT's website.