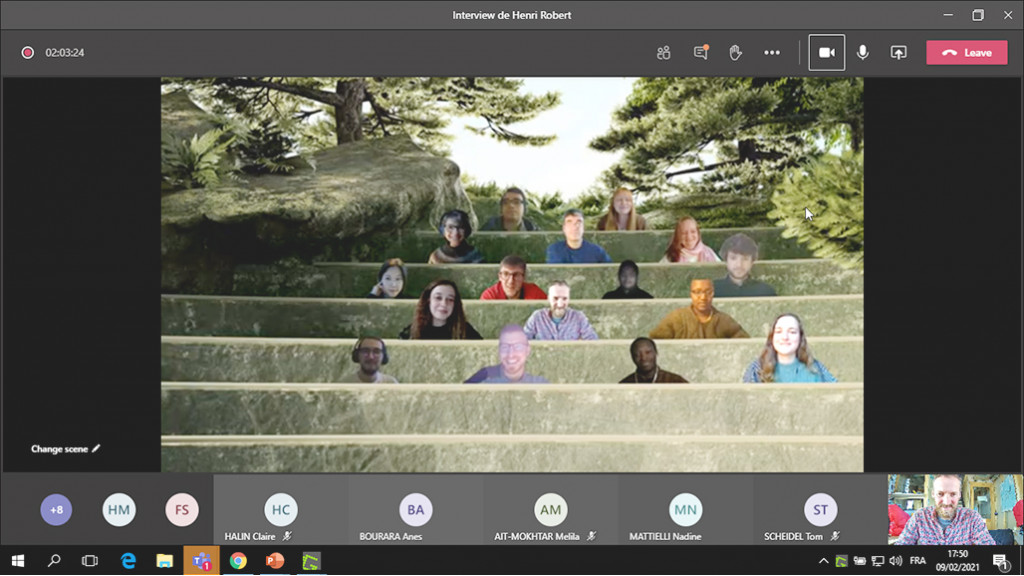 Ever since the IPF has been offering online classes in 2009, soon after the inauguration of the the Princess Elisabeth Antarctica, teachers and professors have enthusiastically welcomed the International Polar Foundation's STEM (science, technology, engineering, mathematics) outreach activities to primary and secondary schools in the form of online classes.

Over the years, staff and scientists at the world’s first zero emission polar research station have taken time from their busy schedules to present to classes the groundbreaking design on the Princess Elisabeth Antarctica (PEA), the world-class science taking place at the station, daily life in Antarctica and what can be done to reduce one’s environmental impact and combat against climate change.

Part of Henri's role at IPF is to increase outreach activities and popularise PEA and the scientific projects taking place there. As a biologist who has had experience in the field over many years, Henri had a number of contacts in schools in Belgium and other countries, even before his first mission to PEA in 2017. So it was logical for him to be in charge of educational outreach activities.

During the 2020-21 season, Henri has been speaking to university, high school and grammar school classes in Belgium, Canada, Spain, Croatia and the UK.

At the beginning of each class, Henri usually gives a PowerPoint presentation about the design and function of PEA. He presents the different areas of the station to give his audience an idea about everyday life at the station and how it optimally uses renewable energy to power everything.

He then gives a historical timeline of Belgium’s involvement in Antarctica, staring with Adrien de Gerlache’s first scientific voyage and overwintering in 1898 aboard the Belgica research vessel. He then moves to subsequent Belgian Antarctic missions starting during the International Geophysical Year (IGY) 1957-58, and finally how the Princess Elisabeth Antarctica was conceived and constructed as part of Belgium’s legacy for the International Polar Year (IPY) 2007-08.

Henri discusses in detail the station’s zero-emission concept, focusing on renewable energy production and managing energy use with a smart microgrid system, the station's water treatment system and passive construction methods. He also highlights that due to its extreme environment, PEA is a great platform for testing out new renewable technologies, showing that the station is as good as anywhere else in the world to put them to good use.

A biologist by training, Henri also fascinates students by telling them about Antarctica’s unique biodiversity, from megafauna such as penguins, whales and seals found along the coast of Antarctica, to snow petrels and microbes that live on the rocks close to PEA. He also explains concepts such as the aquatic food web in the Southern Ocean.

Most importantly, Henri introduces his audience to everyday initiatives they can take to reduce humanity's impact on the planet's ecosystems. Even the smallest gesture done on a large scale can have a significant impact on reducing humanity’s environmental footprint.

“A popular question students often ask is whether scientists in Antarctica witness firsthand the effects of global warming,” Henri explained. “Unfortunately, the symptoms of global warming are becoming more and more obvious.”

“An island just off the tip of the Antarctic Peninsula witnessed a never before seen high temperature of 20.75°C in February 2020. Warming ocean currents are melting glaciers and ice shelves in West Antarctica; about 60% of ice shelves may be at risk of collapsing in the coming decades according to recent research. And a warming climate is already having a significant impact on indigenous species in Antarctica.”

Ideal for all ages

Henri has received quite a lot of positive feedback from teachers about his online lessons this season.

Claire Gillet, a biologist and teacher from the Montjoie Institute in Brussels, with whom Henri has been doing seminars for two years, is always happy with the outcome of Henri’s virtual visit with her high school students:

“I think it’s great that the students get a little bit into the reality of daily life in Antarctica. It breaks down some barriers, which is important at the beginning of the exchange,” said Ms. Gillet. “The students also answered a number of technical questions about the station, which gave them the opportunity to learn about more topics in the follow-up.”

Teachers AmandaTulli and Nadia Lakhdari, teachers from Lasalle Elementary Senior in Montreal, Quebec, were grateful for Henri’s ability to communicate with their fourth graders in an understandable way.

“Thank you for using language that was easy for the kids to understand,” they wrote. “They loved how you were able to show them the view from your window! Thank you again for answering all their questions in a child-friendly way!”

Judith Moreno, a teacher from the Montserrat Institute in Barcelona applauded Henri for making such a big impact on her young students and for giving them advice on how to make a difference.

"They appreciated a lot the practical advice on how they can make a difference in the climate crisis,” she commented.

Both children and young adults will likely witness significant impacts of climate change during their lifetimes. Giving them the possibility to talk with scientists actively conducting research in Antarctica encourages them to become even more passionate about STEM subjects, nature conservation and taking an active role in combatting climate change.

If your school or university would like to organise an online class with some of the scientists and engineers working for the International Polar Foundation, please feel free to contact Henri Robert at science@polarfoundaiton.org.