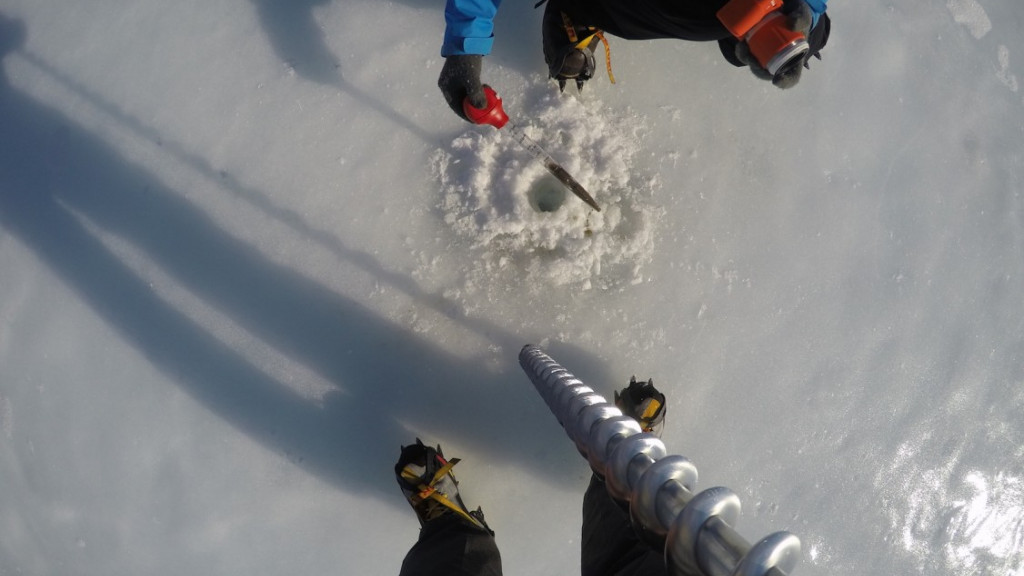 Antarctica is a natural laboratory for studying the limits of life on Earth because it’s one of the harshest and most extreme environments on the planet where only the most resilient organisms can survive. Its geographical isolation from nearly all human activity also means that carbon cycle processes here are unique when compared to elsewhere on Earth.

Dr. Lori Ziolkowski, Baillet Latour Antarctica Fellowship winner, has just returned to Princess Elisabeth for a second season to continue her work on the incredible small microbial life forms that can be found near the station.

She brought an all female team with her this season, young Canadian scientist, Dr. Jenine McCutcheon and Prof. Liane Benning, from the GFZ in Potsdam and the University of Leeds, and also past President of the European Association of Geochemistry.

They’ve been collecting rocks, water, soil and other materials in a wide variety of habitats near the station. They’ve already visited a number of sites to find the best approach to this season's sampling and census activities. So far, they’ve visited Yobuku Valley, Duboisbreen, Teltet, Petrelnutten and the Pingvinane. They have amongst other things, re-visited a lake in the Yobuku Vallet known as "Gigi's Lake", which like last year has open water again.

There are numerous leads to follow after last season's expedition where Lori was accompanied by Dr. Stefanie Lutz also from the GFZ in Potsdam. With the specialized knowledge of the three scientists, it will add another dimension to the microbiology oriented work of last season. The geochemical specialization will allow them to look at other mechanisms of formation of sediments and crystals as well as the pathways for the creation of endolithic communities.

REMACA is a unique opportunity to uncover first estimates of the age of carbon and microbial activity in eastern Antarctica. This will play a part in any future study on past climate patterns and microbial diversity in East Antarctica.

Keep on top of REMACA and discoveries about these tiny resilient creatures here:

Dr. Lori Ziolkowski is a Canadian scientist now working as an Assistant Professor at the University of South Carolina. She studies the role that microbes living in permafrost and glaciers may play in future climate feedback. Lori’s passionate about understanding what controls the limits of life and carbon recycling on Earth. She has developed new techniques to isolate chemicals from complex mixtures to determine their age using carbon dating. She applies these techniques to study the limits of microbes in extreme environments like Antarctica.

Dr. Liane G Benning is leading the  interface-geochemistry group at the German Research Centre for Geosciences, GFZ in Potsdam, Germany and is affiliated with the Cohen Laboratories in the School of Earth and Environment at the University of Leeds. Over the last decade she has focused her work on molecular aspects which govern processes at microbe-mineral-fluid interfaces. Her Arctic work focuses on mineral transformations in icebergs and glacial meltwaters, changes in soil formation in newly deglaciated areas, and the makeup of snow and ice algae. This is Liane’s first trip to Antarctica. She will contribute to REMACA, but also look at soils and rocks, their geo-bio make-up and how they affect carbon and nutrient cycling in the remote, extreme settings around the Princess Elisabeth.

Dr. Jenine McCutcheon is a Postdoctoral Research Associate in the Cohen Geochemistry Group in the School of Earth and Environment at the University of Leeds. Her background is in Geology and Microbiology. Jenine has examined microbe-mineral interactions in a variety of natural and engineered environments, including the Canadian High Arctic, Great Barrier Reef, and various mine sites in Canada and Australia. Her current postdoctoral research expands beyond her interest in microbe-mineral interactions, and will help determine their contribution to darkening and melting of the Greenland Ice Sheet.