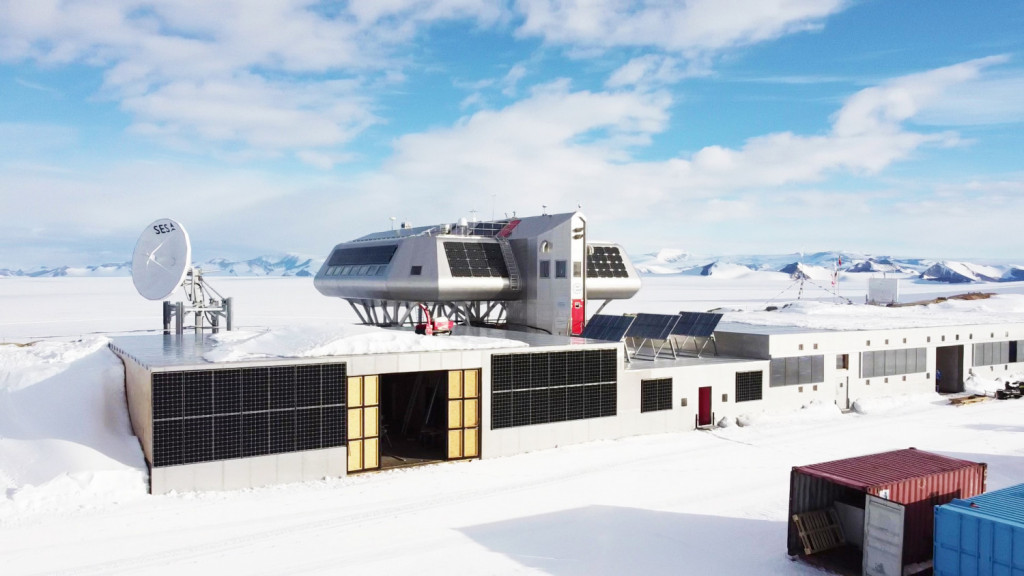 The COVID-19 pandemic has made it difficult for a large number of scientists to travel to the station this year. Ultimately only three scientists representing three different scientific research projects spent time at the Princess Elisabeth Antarctica this season, including two Belgian projects, CLIMB and CHASE, and a Swiss project from the EPFL-CRYOS laboratory, From Clouds to Ground: Snow Accumulation in Extreme Environments.

During his first ever trip to Antarctica, Armin Sigmund, a PhD student from the Swiss Federal Institute of Technology Lausanne (EPFL) spent several weeks in Antarctica doing fieldwork for a project the EPFL CRYOS lab calls From Clouds to Ground: Snow Accumulation in Extreme Environment. His objectives were to maintain and upgrade two automatic weather stations, which his colleagues had installed in 2016. These stations have been collecting data ever since. He also took photogrammetry measurement of the area around PEA using a professional mapping drone. The data he and his team are collecting will help determine net snow accumulation to better understand surface mass balance (SMB) of the ice sheet in East Antarctica.

Preben Van Overmeiren from Ghent University spent the longest time in Antarctica before returning to Belgium in mid-January. Working for both the CLIMB and the CHASE project, Preben spent his time in Antarctica collecting samples from devices his colleagues had installed at PEA and along a 250 km transect from the Antarctic Plateau to the coast to collect organic and inorganic atmospheric particles, hoping to learn about atmospheric currents and how much anthropogenic atmospheric pollution ends up in Antarctica. With the CHASE project in its final season, Preben had to collect passive sampling instruments that his colleagues had set up along this transect. For the rest of the expedition, a number of instruments will continue to collect samples with the assistance of IPF staff.

Works around the station

With an entire season to focus on the improvement of the facility, the BELARE team made a lot of progress to finish a number of construction projects at the station.

After its completion in February 2020, the team used a new system of hinges and pistons to adjust the level of the new station’s annexes. These adjustments compensate for the slow-moving glacier upon which they are built. These two new north and south annexes contain 16 comfortable bedrooms that can sleep up to 32 people, a scientific workplace, storage areas, freezers for provisions, a large snow melter for the station’s water production, carpentry and metal workshop, a space for the emergency generators, and a heated garage for large machinery maintenance and repair.

The team also constructed a brand new, well-equipped surgery room. They also improved several modified living containers to give scientists going on extended field campaigns a comfortable place to stay. The station’s mechanics also checked and maintained machinery and vehicles during the first part of this season.

As for the station’s renewable energy production, engineers Guus Luppens and Johan Demuylder increased the station's capacity significantly by installing on the ridge where the station sits a large number of latest-generation, double-sided solar panels, which are able to collect both incident light from the sun and light reflected off of the snow. They also covered the walls of the new north annex in solar panels, which greatly increases power production and the station’s energy resilience during calm weather, when wind turbines are less efficient.

Process engineer Aymar de Lichterverde, who is responsible for the station’s water treatment system and the drinking water mineralisation system, improved the station's water treatment capacity by installing an aeration system that enhances the efficacy of the bacteria used to treat wastewater in the large bioreactor. He also automated the mineralisation process for the station’s drinking water, which, until now, had to be done by hand.

After several weeks of intensive work, the BELARE team enjoyed celebrating Christmas and New Year’s Eve, despite being a smaller crew than usual, mostly due to COVID-19 restrictions. They even built an eco-friendly Christmas tree out of recycled wood!

For Christmas Eve, the station’s plumber Bernard Polet prepared a traditional three-course meal, and for New Year’s Eve, Expedition Leader Alain Hubert made a festive dinner, including roast duck and a traditional Belgian dish: stuffed tomatoes with shrimps, which was a taste of home for the Belgian crew.

Still much to do

Although the handful of scientists who have been at the station this season have already come and gone, a lot of work remains before the end of the season. The BELARE team will continue to gather and maintain data-collecting equipment for scientists making remote observations. Other tasks they must do include installing windows on the north annex’s wall and finishing all the partitions and insulation between the different workshops, storage areas, and the garage.

Later in February, the team will spend time to prepare the station for overwintering. They will drain all the water systems, store machines and containers in a place where snow accumulation is minimal, and last but not least, programme electronic modes for the autonomous functioning of the station while it is uninhabited for the next nine months.