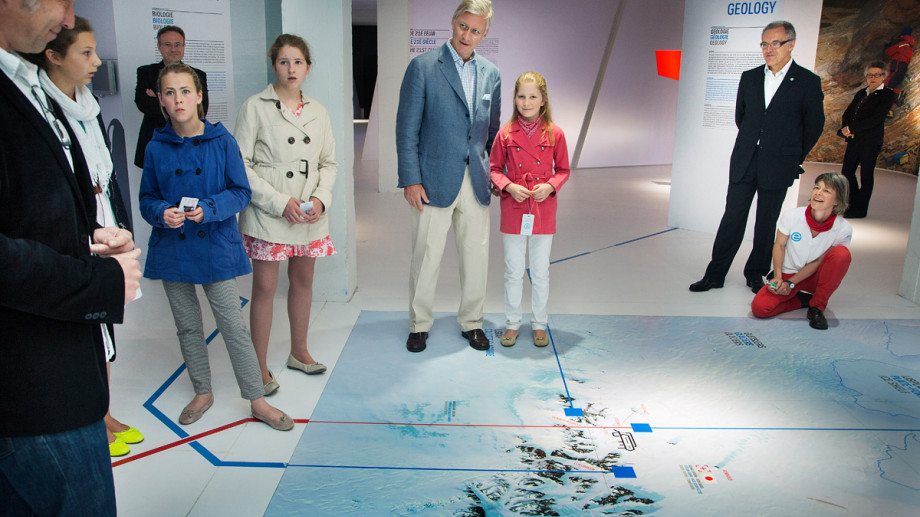 “Inside the Station” features an interactive journey inside the iconic zero emission polar research station, Princess Elisabeth Antarctica. The station was named in honour of Her Royal Highness Princess Elisabeth on its inauguration in 2009, so the Foundation takes special pride in the Princess’ visit.

“It is a great honour for the Foundation to welcome our honorary president His Royal Highness Prince Philippe, and Princess Elisabeth to Inside the Station today”, said International Polar Foundation Executive Director Thierry Touchais. “We fondly remember the “good luck” wishes HRH Princess Elisabeth recorded in 2009 for Alain Hubert and the construction team in Antarctica for the station’s inauguration. In a week when 49 foreign delegations are here in Brussels for the Antarctic Treaty Consultative Meeting, the Foundation is proud to pursue its mission by sharing the achievement of Princess Elisabeth Antarctica, which continues to showcase Belgium on the international stage”.

Inside the Station features reconstructions of the polar research station and its environment, which give visitors the opportunity to experience to daily life in the frozen South, the importance of polar science, and the continuing evolution of the world’s first zero emission polar research facility, along with:

Five years after displaying the polar station at Tour & Taxis, the International Polar Foundation welcomes the public to once again share in the success story that is Princess Elisabeth Antarctica.
Inside the Station opened at Tour & Taxis, Brussels on December 22, 2012, and runs until May 31, 2013.

Located in East Antarctica’s Sør Rondane Mountains, Princess Elisabeth Antarctica welcomes scientists from around the world to conduct research in this little-studied and pristine environment.

Princess Elisabeth Antarctica was launched at Brussels venue Tour & Taxis in 2007, drawing 35,000 visitors in just four days, before it was shipped to Antarctica for deployment.

The success of Princess Elisabeth Antarctica marks an important development in the philosophy of sustainable development, demonstrating how the climate challenge can be met through goodwill and collaboration between civil society, business and governments. The project proves how readily accessible technology can be harnessed to achieve a low carbon society, without compromising our collective or individual wellbeing.

The energy solutions perfected at Princess Elisabeth Antarctica are already being successfully commercialised by the project’s technical partners for use in mainstream applications.

Based in Brussels, Belgium, the International Polar Foundation recently celebrated 10 years of achievement. Created with the objective of providing a novel interface between science and society, it was recognised by Belgian Royal Statute as a foundation for the public good in 2002.

The International Polar Foundation supports polar scientific research for the advancement of knowledge, the promotion of informed action on climate change, and the development of a sustainable society.

Founded by Belgian polar explorer Alain Hubert, Prof. Hugo Decleir and Prof. André Berger in 2002, the Brussels-based International Polar Foundation provides a novel interface between science and society, and was recognised by Belgian Royal Statute as a foundation for the public good in 2002.